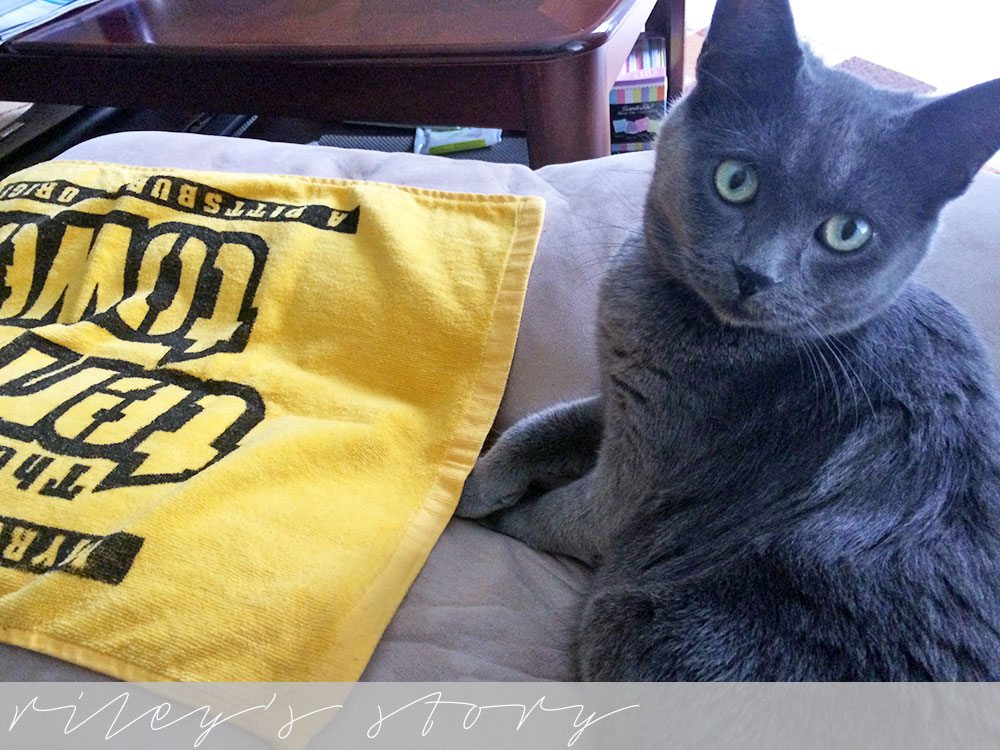 Last week, I wrote about the story of how Owen and Taby came into our family. Today, I’m talking about our most recent addition, Riley! We brought Riley home on June 9, 2013, and it’s been a blast ever since. Let’s get to know her a little better, and then I’ll write about her whole story. 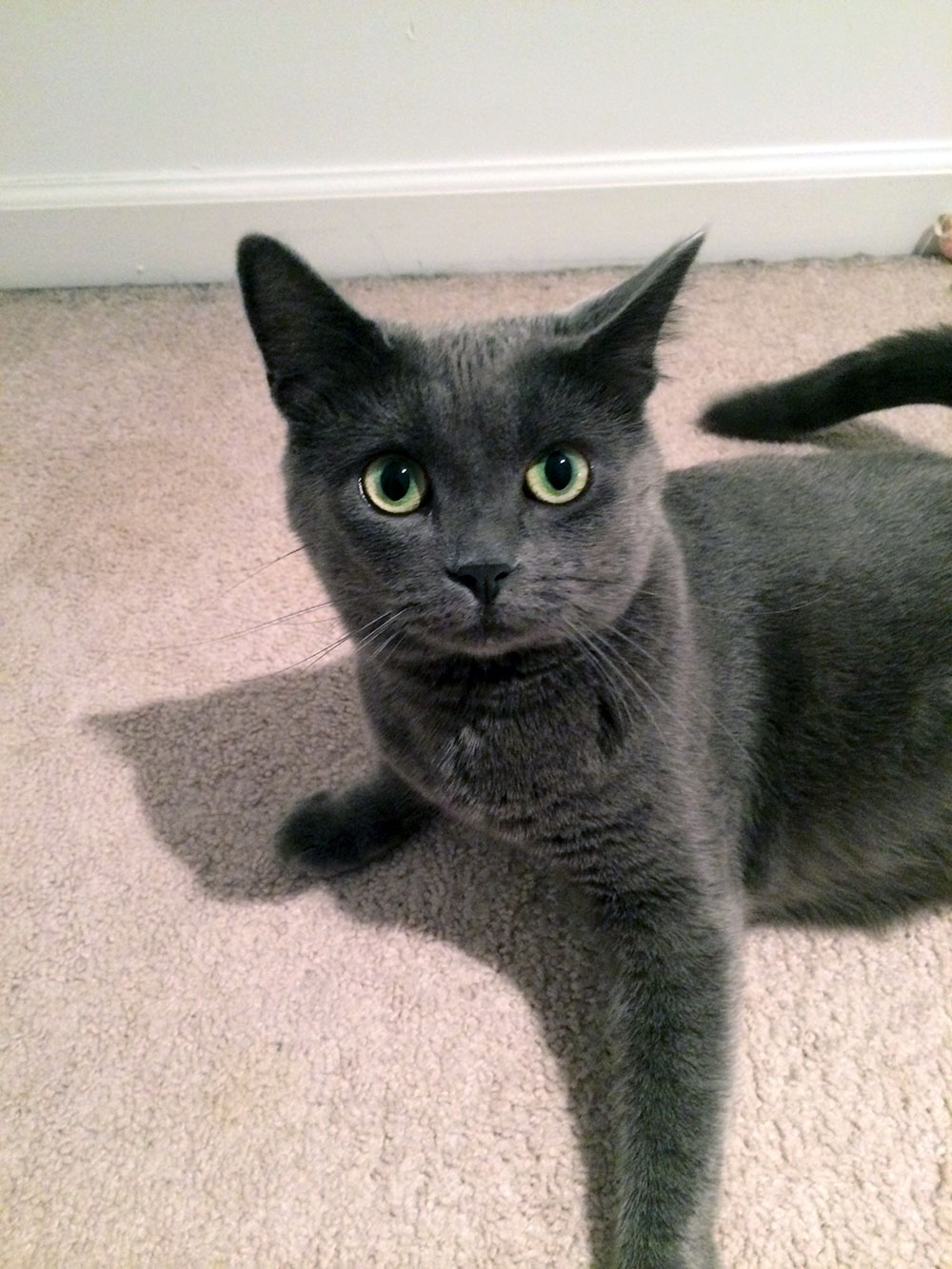 age: 2-ish
nickname: Rye Bread
loves: licking our hands, playing with any and everything, lying on her back with her paws in the air, going on car rides 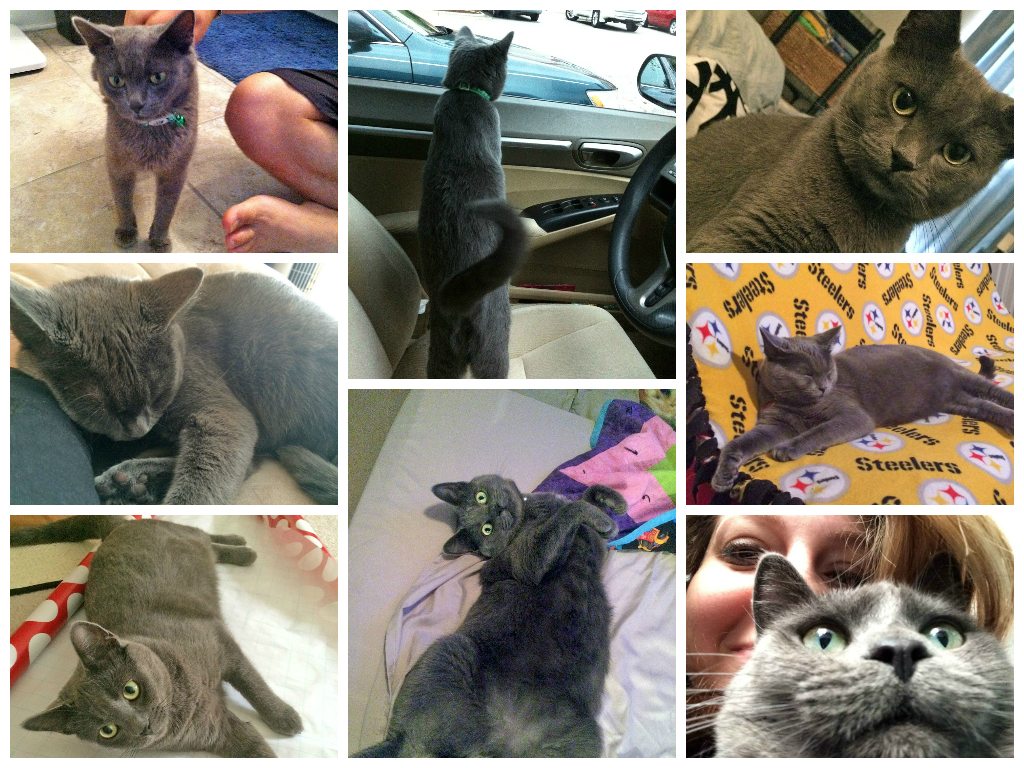 In the beginning of June 2013, TJ and I were watching the local news while we were eating breakfast before work. The anchors mentioned that the Raleigh SPCA was having a weekend deal on all cats and kittens, and they showed tons of cute videos of the cats at the shelter. We “aww-ed” for the whole segment, and mentioned kind of in passing that it would be cool to check them out, “just to look”. (Ha!)

When that Saturday rolled around, I mentioned it again to TJ, and he thought it’d be fun to go look at the cats, again, just for fun. He reiterated several times that we weren’t getting a cat, we were just going to see them. Once we got to the shelter, we checked out all of the adorable kittens, and then went into one of the rooms with a few of the older cats. We were immediately drawn to a cute little 1-year old grey cat named Clover, who seemed completely chill. She just kind of laid there, and let us pet her, and then she went over to her bowl and ate some food. One of the workers mentioned that she must feel comfortable around us to be able turn her back to us while she ate.

Little Clover didn’t seem to be getting too much attention, partially (I think) because her stomach was shaved and swollen, due to recently giving birth and getting spayed. The worker explained that the swelling would go down over the next week or so and that the fur would grow back shortly too. True to our word, TJ and I had fun looking around, but we headed home after grabbing a few toys at the SPCA’s store for Owen and Taby. 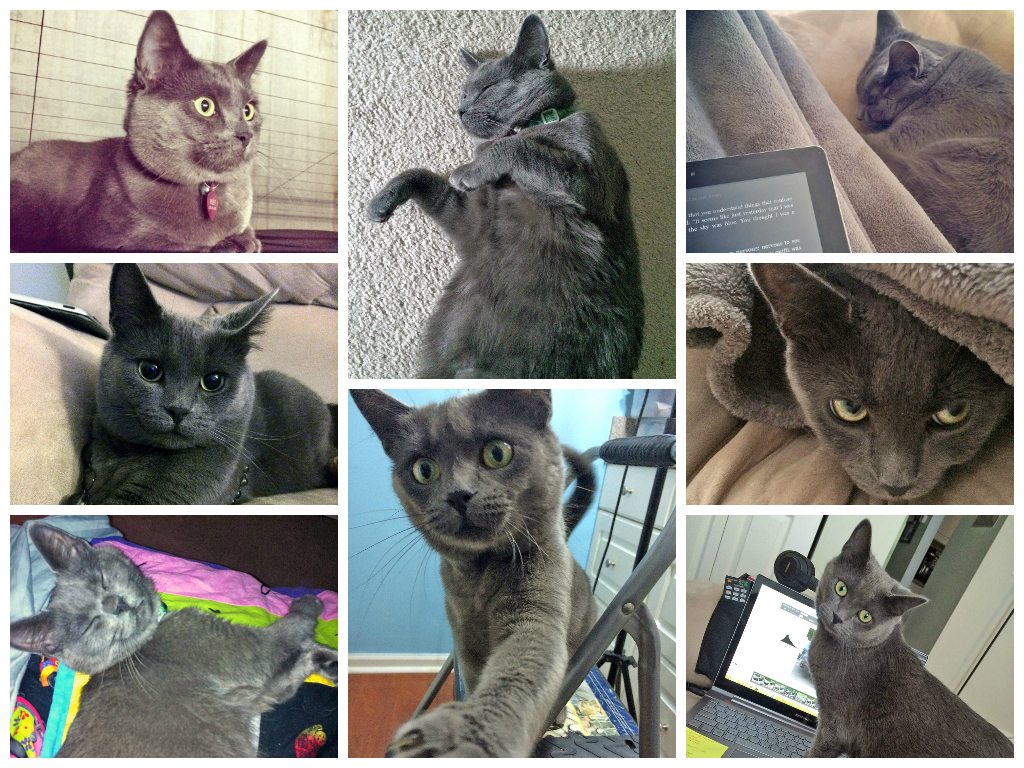 After we got home, TJ and I talked a little more about Clover and how cute and sweet she was. At one point, TJ said, “I’d kind of hate it if we went back tomorrow and someone else had adopted her.” I was shocked that he was seriously considering bringing her home, but I told him that I agreed – she just seemed like she was meant to be part of our family. The next afternoon, we went back to the SPCA and said that we had to bring Clover home with us. A few forms and one adoption interview later, she was ours! We decided to change her name to Riley, and the rest is history!

I remember being shocked that she didn’t meow once on the ride home – she just chilled in the carrier we brought for her, and as soon as we pulled up to our house, she stood up, almost like she knew she was finally home. When we brought her into the house, she didn’t run and hide; she spent the afternoon playing with some toys and the night sleeping at our feet. It was a perfect fit (even if Owen and Taby weren’t too sure about her at first).

Riley keeps us laughing every day, and I’m so glad we went to the SPCA that day on a whim. What a fun addition to the family!

You can read about our first week after bringing her home here.

Have you ever unexpectedly adopted a pet? I want to hear about it!