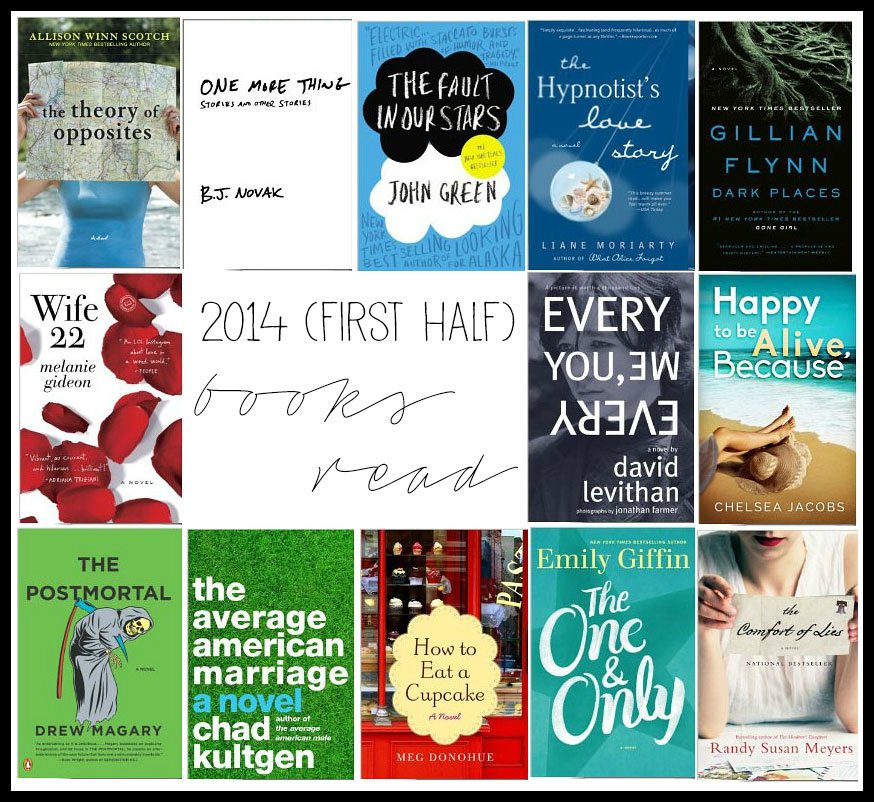 I did a horrible job of reading for fun in 2013, so at the beginning of this year, I decided to really get back into it, and tear through as many books as possible. I thought it’d be fun to do a halfway-through-the-year check in on the books I’ve read so far this year. If you’re looking to read a little more too, I hope you’ll get some inspiration from this list! At the end of the year, I’ll do another recap of the books I read between July and December.

The Theory of Opposites by Allison Winn Scotch
This was a pretty light read about a woman who’s life goes through a few major changes all at once. Overall, I liked it enough, but it wasn’t memorable enough to really stick out in my mind, and some parts of it were slow. The Kindle version is only $2.99 right now though, so it’s definitely a good price for a light read.

One More Thing by BJ Novak
This is a book of short stories written by BJ Novak (Ryan Howard on The Office). I have a soft place in my heart for books of short stories, and BJ is hilarious, so this book was a total win. Some of the stories were really short, as in just a page or two, while a few others were a bit longer. They were all enjoyable though, and I was disappointed when I got to the end. Fingers crossed he writes another set of stories in the future.

The Fault in Our Stars by John Green
Obviously, just about everyone and their mom read this over the past few months, and it really is as good as everyone says it is. I ended up staying up much later than I usually do to finish it, and it was just one of those books that sticks with you long after you finish reading it. Also, the movie did the book justice, and you should see it if you haven’t yet.

The Hypnotist’s Love Story by Liane Moriarty
I really enjoyed this story about a woman who starts dating a man with stalker. It was an interesting concept, particularly since it alternated between the point of view of both the main character and the stalker. It was a good read, that I’d definitely recommend.

Dark Places by Gillian Flynn
This is one of my favorite books that I’ve read so far this year. It’s by the same author that wrote Gone Girl, and it was equally captivating (maybe even a little more so). The main character is a woman whose family was brutally killed when she was a child, and she testified that her brother is the one who killed them all. It alternates back and forth between present day and the day before the murders, and it was just SO good and creepy. It had me on the edge of my seat the whole time, and when I finished it, I wanted to read it all over again. The movie based on this book comes out in a few months, and I’m looking forward to seeing it.

Wife 22 by Melanie Gideon
This book is what I’d call “good, not great.” It wasn’t even close to a bad book, but I just had a hard time connecting with the main character. Maybe it’s because Dark Places was just so good that reading anything immediately after it would be a bit of a letdown? Regardless, this was an easy read, and I did ultimately enjoy it.

Every You, Every Me by David Levithan
This book was written in an interesting way – the author worked with a photographer, who would send him an image, and the author would write part of the story. Then another picture would come, and he’d build on the story based on the next photograph. The photographer didn’t know what the story would become and the author didn’t know what the next picture would be. Such an interesting concept, and I enjoyed that the pictures were included throughout the story.

Happy to Be Alive, Because by Chelsea Jacobs
This book is written by fellow blogger, Chelsea, from The Girl Who Loved to Write! I was so excited to read Chelsea’s book, and it did not disappoint. I was captivated with the story from the first page, and I thought that the emotions expressed by the main character were incredibly relatable. I hope Chelsea writes another book, because she’s definitely talented. In the meantime, if you’re not already reading her blog, check it out!

The Postmortal by Drew Magary
This book had such an interesting premise – in the not-so-distant future, there is a cure for aging. It sounds wonderful at first, but following the main character through his life over the decades (as he continues to look and feel like a 29 year old) showed that there would be plenty of downsides to an ageless life. This book just completely enthralled me, and I hated when I had to put it down. In a weird way, it helped me to kind of appreciate the beauty of death, and it remains one of my favorite books that I’ve read so far this year.

The Average American Marriage by Chad Kultgen
This book takes a (hopefully!) fictional look at marriage through a man’s eyes. It’s crass, and apparently like being in a typical man’s brain, but then again, the author has never been married, so it’s hard to tell how accurate it is. I’d like to think TJ isn’t much like the main character in this book, as he’s pretty despicable. Still, an interesting read for sure, and one that I read in just a couple days.

How to Eat a Cupcake by Meg Donohue
This was another fun read about two former friends who end up opening a cupcake shop together. I liked that the book alternated between the points of view of the two main characters, and the story ended up having a little more depth to it than I originally expected there to be. This would be a good beach read.

The One and Only by Emily Giffin
Oh, Emily Giffin. She just knocks it out of the park every single time. When I saw that she had a new book coming out, I didn’t even read the premise before downloading it, because I knew I’d love it. When I realized it centered around football, I was ecstatic. This book was so, so, so good. I spent a good portion of one night reading 200 pages, because I just couldn’t bear to put it down. Definitely add this to the top of your reading list, even if you don’t like football. And if you’ve missed any of her other novels, read them immediately too. So good.

The Comfort of Lies by Randy Susan Meyers
I just finished this one on Tuesday, and it was great. Honestly, it started a little slowly, but once I was about 100 pages in, I was completely hooked, and I finished it in a few days. Without giving anything away, this book alternates between the perspectives of three different, but very connected women. I couldn’t stand one of the characters, but the story was still really interesting.

There you have it!

Have you read any of the books on this list? What have you been reading lately? Do you have any book recommendations for me to check out? Let’s talk all things books!