I love reading the story of how two people end up together. Our story is a little long because we took things slowly and really got to know each other, but if you’re anything like me, you might enjoy reading our story! 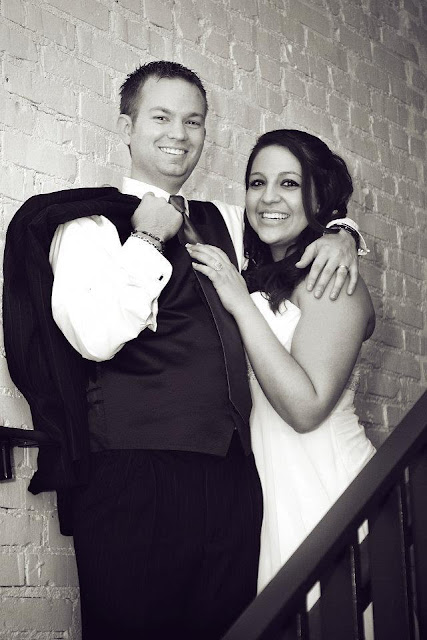 I start a new job and nervously get introduced to everyone around the office. The last person I meet sits way on the other side of the building, and my heart does a little jump when I shake his hand. I chalk it up to natural first day nerves and tell myself that it’s not because he’s the cutest guy in the office.

Time passes by as I get settled into my new job. I don’t see the formerly mentioned cute guy much, but occasionally he walks down and talks to every single person on my team… except me. (Turns out he used to be on the team and knows everyone from before I started). I get totally blushy and nervous when he’s around, and hope he doesn’t seem to notice as he talks to everyone.

A birthday card for this dreamy guy gets passed around for everyone to sign. I start to pass it along without signing, since I don’t really know him, but a coworker encourages me to sign it anyway. I write a heartfelt message: “Happy Birthday!! – Ashley”

Ridiculously good-looking office guy who just had a birthday comes down to talk to everyone (but me) again. Our eyes meet, he’s standing right next to my desk, and he gives me a friendly look so I boldly ask him if he had a good birthday. Palms are totally sweaty, and cheeks are really blushing. I’m worried he thinks I look like a crazy person. Turns out he can’t tell how nervous I am (he might even think I’m cute!), and we talk candidly for a few more minutes.

Totally hot coworker that I’ve now spoken to adds me as a contact on our office communicator system. He proceeds to IM me constantly throughout each work day over the next few weeks. My heart is jumpy and my stomach is full of butterflies for most of December (and spoiler alert – every month since then because he’s awesome).

Office Christmas party, and this adorable IM buddy of mine keeps coming to talk to me throughout the night. Can he see me blushing??? This handsome coworker has become my handsome new friend.

Everyone is getting ready for the Christmas holiday, and the office is buzzing with excitement. My stunningly charming new friend is going home to New York for the holidays. Right before we leave, he suggests we exchange phone numbers. I don’t expect to hear from him, since he’ll be home with all of his family and friends. I get a text from him within an hour of leaving work, and my heart does many more jumps.

My friend Tracey and I drive up to Pittsburgh for a Steelers/Ravens game. I get a “good morning” text from my new friend every morning of my trip. He also calls me for the first time.

Handsome new friend asks if Tracey and I want to take a road trip up to New York from Pittsburgh and hang out for New Year’s. We’re always up for an adventure, so we make the 4 hour trip.

We have a fun time in New York and ring in the New Year with my cute new friend and all of his friends. I’m convinced that he’s going to kiss me at midnight. The clock strikes midnight, the ball drops, and… he doesn’t kiss me. My jumpy heart drops a little.

My ridiculously good looking coworker turned friend, Tracey, and I make the drive back to Raleigh. At one point, I take a break from driving and ride with my new friend for a while. I somehow work up the nerve to playfully tell him I was hoping for a kiss at midnight. I immediately can’t believe I said that. Handsome new friend leans over and kisses me without skipping a beat. Everything seems to stop, and my heart jumps more than I thought possible.

My cute new friend turns into my standing Friday night date. Every Friday after work we go to his place to make dinner and rent a movie to watch. We never talk about whether or not we’re officially dating.

We go to a birthday dinner for one of our coworkers. We ride together and sit across from each other, but no one knows we’ve been seeing each other. Our coworker asks to set me up with one of her friends. I don’t know what to say, my standing Friday night date won’t look at me, and I stumble my way through a vague answer. We leave the restaurant without talking about what happened. I want to ask if we’re exclusive, but chicken out. I drive myself home, and decide I can’t take it anymore. I call him and ask if he’s seeing anyone else, because I only have eyes for him. He emphatically agrees. Looks like my coworker, turned friend, turned standing Friday night date has turned into my boyfriend. He later tells me that he was certain I would stop talking to him in order to go out with our coworker’s friend. Silly guy couldn’t tell how crazy I was about him.

My car is getting work done at the dealership. My adorable boyfriend takes me to dinner and then to go pick up my car. Before I get into my own car, we say “I love you” for the first time. We’re both nervous and it’s awesome. I fall asleep that night with a smile plastered on my face.

Life with this handsome boyfriend of mine is great. We rarely argue, and we teach each other many new things over this time. He gets me to ride on the back of his motorcycle, I show him how awesome Steelers football is. It’s blissful, and I can’t imagine being happier.

My amazing boyfriend and I are in Pittsburgh for the Steelers/Ravens game, eating breakfast before the game. He says some really sweet things that I can’t completely remember and then he’s asking me to be his wife. I’m genuinely in shock, and happily manage to say “yes” despite the surprise. This cute boyfriend of mine has become my fiance.

My coworker, turned friend, turned standing Friday night date, turned boyfriend, turned fiance becomes my HUSBAND as we tie the knot in front of our family and friends. It’s a wonderful night full of love and laughter. I’m so happy I think I might burst.

We navigate marriage together and somehow get happier every day. There is a lot of laughter, honesty, and most of all love. He continues to make my heart jumpy on the regular, and he gets even more good looking as the time goes by. I never stop wondering how I got to be so lucky.