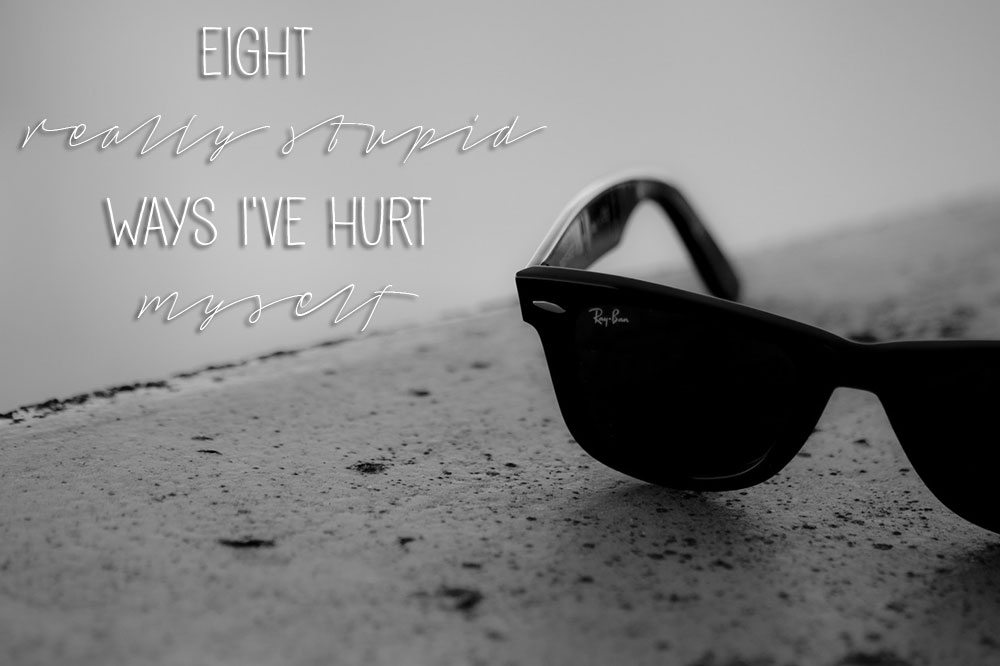 One of my favorite blog posts I’ve ever written is called, “That Time A Maxi Dress Broke My Nose.” It’s just a completely ridiculous story, and it really sums up the kind of luck I usually seem to have. If you haven’t read it, please do – it’s good for a nice laugh, and it has some pretty crazy pictures of what my face looked like after kissing the pavement.

Unfortunately, that’s not an isolated incident in my life. For as long as I can remember, I’ve taken the word clumsy to the extreme. Although I’ve been lucky enough to never have surgery or stay overnight in a hospital, I’ve got quite a list of ridiculous ways I’ve hurt myself over the years. Yes, enough to warrant a whole dedicated blog post. Let’s get started.

1. Culprit: Round Magnet Injury: Thumb Year: 1989
Now, I don’t remember this story at all, because it happened when I was two, but my parents tell me that we were having dinner at their friends’ house, and somehow I started playing with a round magnet, and it cut my thumb. The cut was deep enough to require stitches (my only time ever, surprisingly!) and I still have a tic-tac-toe shape scar as a memento.

2. Culprit: Playground Swing Injury: Arm Year: 1993/1994 ish
When I was in second grade or so, my mom volunteered at my elementary school, so I would have to stay after school with her while she did stuff around the classrooms. I was out on the playground, standing on a swing, for a reason I can’t remember, and I was swinging like that pretty fast. Next thing I know, I fall forward off the swing and land on my arm. I remember it shaking pretty hard, so my parents took me to the emergency room, and it was put in a sling for a few days. I remember my parents got me these sweet Crayola Jumping Markers for being brave at the hospital.

3. Culprit: Blanket/Hot Roller Lid Injury: Knee Year: 1999
This has to be the most random culprit ever, right? My dad was getting ready to retire from the Navy, and a bunch of people were in town for the ceremony and staying with us, so there was just random stuff everywhere. All of us kids decided to choreograph a dance to the song “Grade 9”, and during our practice, my foot got tangled up in a blanket. Turns out, underneath the blanket was a plastic hot roller lid that had a sharp, jagged edge. Somehow, my knee landed right on that jagged piece, and it sliced up a good chunk of my knee. I remember when I showed my dad, he thought it was an elaborate prank. Sadly, it was real and crazy painful!

4. Culprit: Crutches Injury: Ankle Year: 2002
A few years before this, I had sprained my ankle in a totally legitimate way, in dance class, so I had crutches laying around the house. I was bored one afternoon, so I turned them upside down and was standing/walking around on them like stilts. I was showing my mom when I fell off, spraining the same ankle from the original injury. Seriously, how insane is that? So, yes, playing on crutches landed me back on crutches for a few weeks. My freshman year of high school. For real. Nerd city.

5. Culprit: Stairs Injury: Foot Year: 2006
Fast forward four years to my freshman year in college. I went to a small private school where I didn’t know anyone, and it was about three weeks in. After an afternoon class, I was walking down a pretty large set of steps, and my flip flop got caught on a step at the top. I started tumbling down the stairs, trying to catch myself, but I had no luck – I kept right on tumbling down until the very bottom. A good number of people saw, but no one asked if I was ok or helped me up. I didn’t have a car my freshman year, so I couldn’t go to the hospital, but I went to the on-campus nurse, and she gave me crutches (again). My foot was swollen to the point that my mom told me it looked like I gained 30 pounds in just my foot when I texted her a picture of it (from my pink Razr phone, HAHA). There’s a tiny bone on the top of my left foot that still sticks out from that fall.

6. Culprit: Electric Stapler Injury: Thumb Year: 2008
I’ve always been a bit of a procrastinator, so one night, I was up super late finishing a paper that was due the next day. I had a pretty cool electric stapler, and of course just as I went to staple my finished paper together, it ran out of staplers for the first time since I got it. It was having a kind of hard time refilling it, for some reason (maybe the late hour?), and stupidly, I was holding it right up against my thumb. There must have been one last staple in it, because I somehow I hit it, and the staple went flying into the top of my thumb, and coming out my nail. Again, I found myself in the ER, where the doctor pulled it out and it started bleeding. But hey, at least I made the deadline for the paper.

7. Culprit: Razor Injury: Middle Finger Year: 2009
I was on a weekend trip to Charlotte with a few girlfriends, and we were packing up to leave the hotel and drive home. I reached into my toiletries bag and felt a sharp pain on the top of my middle finger. The plastic cap on my razor had come off, and I had sliced the top layer of skin right off. It bled f-o-r-e-v-e-r, and took several weeks to heal. Eventually the skin started growing back over and I got a small piece of fuzz in it, when pulling on a hoodie one night, so I had to peel off the new skin and remove the fuzz, which hurt almost as much as the original cut. Seriously ridiculous.

8. Culprit: Dining Room Chair Injury: Head Year: 2013
I was standing on one of our dining room chairs, taking pictures of this Cat Toy Tote DIY, and when I went to get off the chair, I leaned forward, and the chair went under me, which caused me to fall off backward and hit my head on our hardwood floors. I had an instant headache and spent a good portion of the rest of the day with ice on my head, but luckily, the damage wasn’t severe.

Do you have any ridiculous injury stories? I want to know that I’m not the only one out here like this!