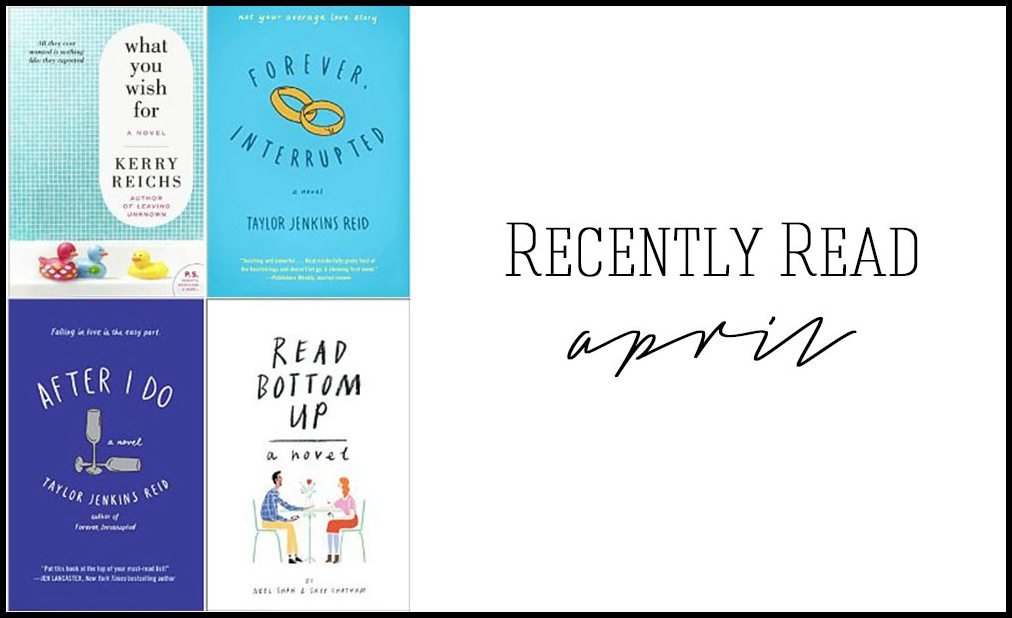 Last month, I think I found my new favorite author (Taylor Jenkins Reid), so I’d say it was a great month for reading. I’m excited to be linking up with the Show Us Your Books link-up this month, that Erin told me about!

What You Wish For by Kerry Reichs
This book is about several different characters and their journeys to having (or not having) kids. At first, it was kind of hard to keep track of the characters, because there were so many of them, but eventually I was able to remember who was dealing with what, and I ended up liking it. I also enjoyed seeing how, over time, the characters’ lives started to interact.
The verdict: This is a good summer beach read, but just know that it might take you a bit to keep track of everyone involved in the story.

Forever, Interrupted by Taylor Jenkins Reid
While I was reading this one, I was convinced it would be the best book I read in April, because I loved it so much. The story is about a woman who has been in a whirlwind romance with the love of her life, to the point that they elope just a few months after meeting. Less than a week after tying the knot, her husband is killed in an accident and she’s left being the widow of a man she barely had a chance to love. I really enjoyed this book and reading about her journey from newlywed to widow, especially as she dealt with her new mother-in-law after they both lost one of the most important people in their lives.
The verdict: Read this book immediately!

After I Do by Taylor Jenkins Reid
I downloaded After I Do seconds after I finished reading Forever, Interrupted because I just loved Taylor Jenkins Reid’s writing so much. (I highlighted so many quotes in both of her books – SO relatable!) As soon as I started this one, I knew it would be a total toss-up in terms of which book I would end up liking more, because this one was so good too. So basically, Forever, Interrupted and After I Do tie as my favorite books of the month. This novel tells the story of a relationship several years into marriage and what happens when a husband and wife decide to take a year apart from their relationship. It was so interesting to read about how their relationship started, and eventually started to disintegrate as the years went on.
The verdict: Read this one as soon as you finish Forever, Interrupted. Seriously.


Read Bottom Up by Neel Shah and Skye Chatham
This was a fun book about dating in the modern world, and it was written completely in text messages and emails. The story focuses on a guy and a girl who start dating, and shows the texts and emails between them and their best friends. It’s definitely interesting to see how much technology has changed the world of dating, and I thought this was a super fun and very quick read that’s relatable for people in their late 20s.
The verdict: Read this if you’re in the mood for something cute that will only take you a few hours to read.

What’s the best thing you read last month? Have you read any of the books on this list?