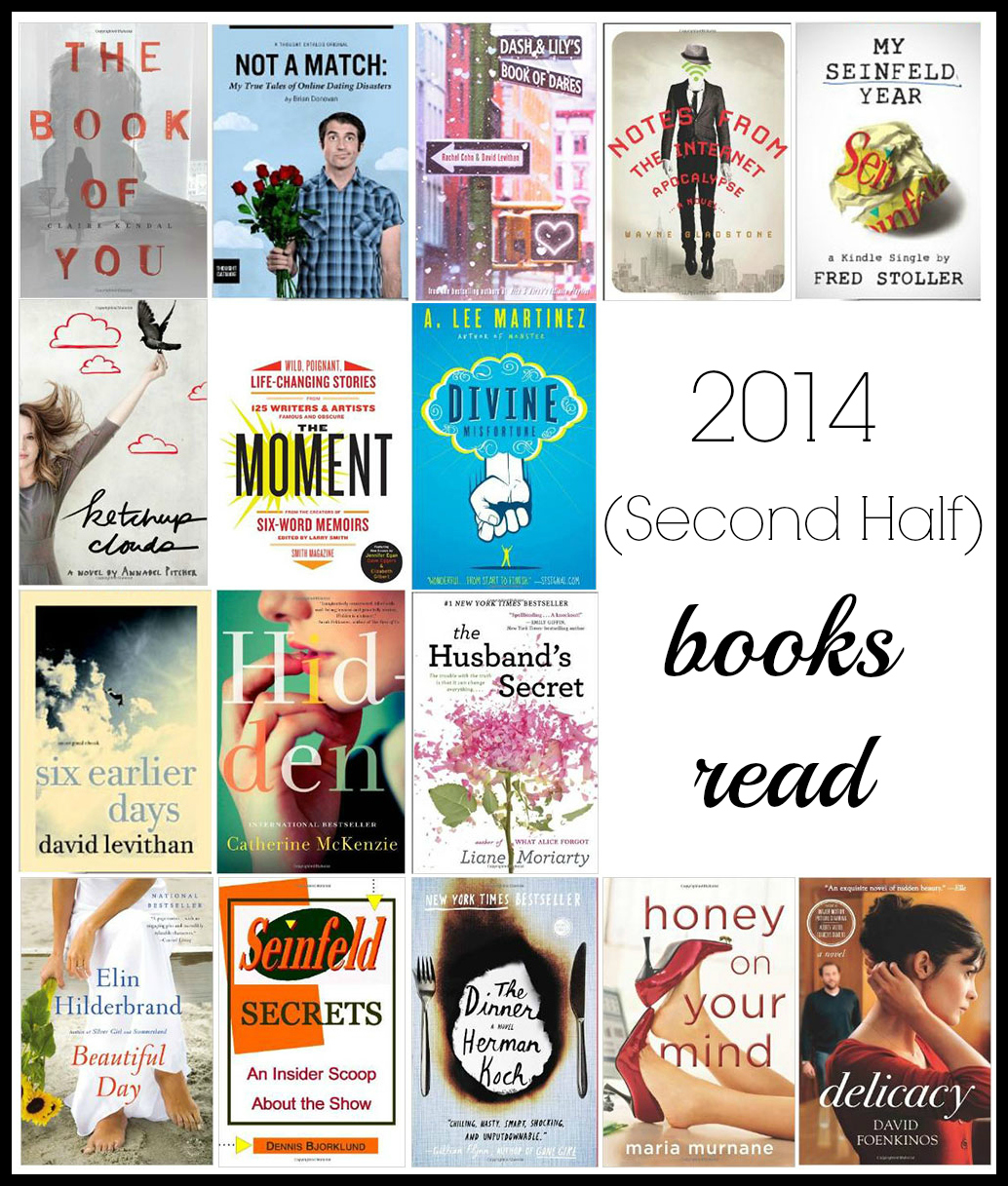 Back in June, I recapped the books that I had read during the first half of 2014, so I thought it’d be fun to talk about the books I read during the second half of the year today. I went into 2014 hoping to read much more than I did in 2013, and it was a success! Overall, last year I read 30 books, which I’m proud of doing (though, disclosure: a few of them were super short stories that I read in an afternoon).  Also, I decided that it’s too hard to remember details about all of these books from several months ago, so going forward, I’m going to start a monthly recap of what I’ve been reading, starting this month. Hope this post can give you a few new suggestions to add to your reading list!

The Book of You by Claire Kendal
This book revolves around a woman serving on a jury while she deals with an intense stalker in her own life. It was suspenseful at times, and overall I enjoyed it. It took me a while to get through it, but once the story started picking up, I couldn’t wait to see how it would all end.

Not a Match: My True Tales of Online Dating Disasters by Brian Donovan
This was a fun and quick read detailing one man’s journey through the world of online dating. Most of the stories were short and funny, and it definitely helped me to be happy that I’m not out in the dating world anymore. People are ridiculous!

Dash and Lily’s Book of Dares by Rachel Cohn and David Levithan
I’m not usually a big reader of the Young Adult genre, but I actually read two during the second half of the year, and I really enjoyed both of them. This one is a cute story of two teenagers who meet when one decides to accept a set of dares left on a bookstore shelf by the other.

Notes from the Internet Apocalypse by Wayne Gladstone
What would happen if the internet suddenly stopped working across the world and it doesn’t come back? That’s the whole premise of this book, and I found it fascinating to think about what the world would be like if, after being so used to relying on it, the internet suddenly ceased to exist. It’d be crazy, that’s for sure!

My Seinfeld Year by Fred Stoller
I am HUGE fan of Seinfeld (and that’s probably an understatement), so I loved reading this short book about the experience of a writer/guest actor for the show. My only complaint is that it wasn’t longer.

Ketchup Clouds by Annabel Pitcher
This is the other Young Adult book I read, and I enjoyed this one just as much as the first. Maybe I’ll have to give the genre more of a try this year? This book tells the story of a teenager writing to an inmate on death row. Through the letters, we get to see little snippets of her life, and learn about a secret she’s been keeping from her family.

The Moment: Wild, Poignant, Life-Changing Stories from 125 Writers and Artists Famous & Obscure Edited by Larry Smith
This is a book of short stories, written by a wide variety of people, on a wide variety of subjects. I liked it a lot, but for some reason, by the end of it, I was ready for it to be over. I can’t really explain why though. Fun fact: if you watch Orange is the New Black, Larry Smith, the editor of this book, is the real life fiancé/now husband of Piper.

Divine Misfortune by A. Lee Martinez
This book is set in a world where mortals can either live their lives on their own, or choose a deity to worship and reap the benefits/consequences that come with it. The main characters in this story choose an interesting deity, to say the least, and things start to get complicated pretty quickly. I thought this was a quirky little story, set in a unique universe, and it was overall a light read.

Six Earlier Days by David Levithan
This is a short story prequel to one of the books I read a few years ago called Every Day (check out my review on it!). I read this one in less than an hour, and I loved being taken back into A’s world. Definitely give this and Every Day a read sometime soon!

Hidden by Catherine McKenzie
I think this was my favorite book that I read this year. I just really loved it a lot. It tells the story of a man who it struck by a car and killed and how it affects his wife and coworker. The story is told through the alternating perspectives of the man, his wife, and his coworker, and it was so interesting. If you read only one of the books on this list, I’d say make it this one.

The Husband’s Secret by Liane Moriarty
I felt like I was a little late to the party on reading this one, but luckily, I managed not to hear what the husband’s secret actually was beforehand. This book has had hype for a reason – it was great! I connected so much with one of the characters that I felt like the author was just straight up describing me. It was also told in alternating perspectives (I really like that, if you can’t tell), which I think added a nice element to the story. Definitely put this one on your list too, if you haven’t already.

Beautiful Day by Elin Hilderbrand
This book tells the story of a Nantucket wedding, the details of which were all planned in a notebook by the bride’s late mother. This was an interesting story, that while centered around a sweet event, focused on the hardships of those involved in the wedding. I liked this book a lot, and now I really want to go visit Nantucket.

Seinfeld Secrets: An Insider Scoop About the Show by Dennis Bjorklund
Did I mention that I’m a Seinfeld fanatic?! I loved this book, which talked about all kinds of behind the scenes stuff, including a breakdown of every single episode. If pretzels make you thirsty, and you have trouble finding your car in a parking garage, read this book immediately.

The Dinner by Herman Koch
This entire book takes place during the course of one dinner. To be honest, I thought this had kind of a slow start, but as the story started to progress, I got really into it. It’s suspenseful and interesting, and I liked that it took place in Amsterdam. Definitely worth getting through the slow start to finish this story.

Honey on Your Mind by Maria Murnane
This is the third book in a series that I started a few years ago. A classic “chick lit” kind of book, it follows the female lead as she navigates through life, work, and love. I’m a total sucker for the book version of a romantic comedy, and this one doesn’t disappoint. Do yourself a favor and start with the first book (Perfect on Paper: The (Mis)Adventures of Waverly Bryson) if you’re looking for a fun, easy read.

Delicacy by David Foenkinos
This novel was originally written in French, and translated into English after its success. It tells the story of a young woman whose husband suddenly dies, and a relationship that begins to develop with one of her coworkers. I thought this was a sad and sweet story, and I loved the use of footnotes throughout. It was turned into a movie a few years ago, and I hope to watch it soon.

Have you read any of these? Do you have any book suggestions for me to add to my reading list? What’s the best book that you read last year? Let’s talk all things reading!