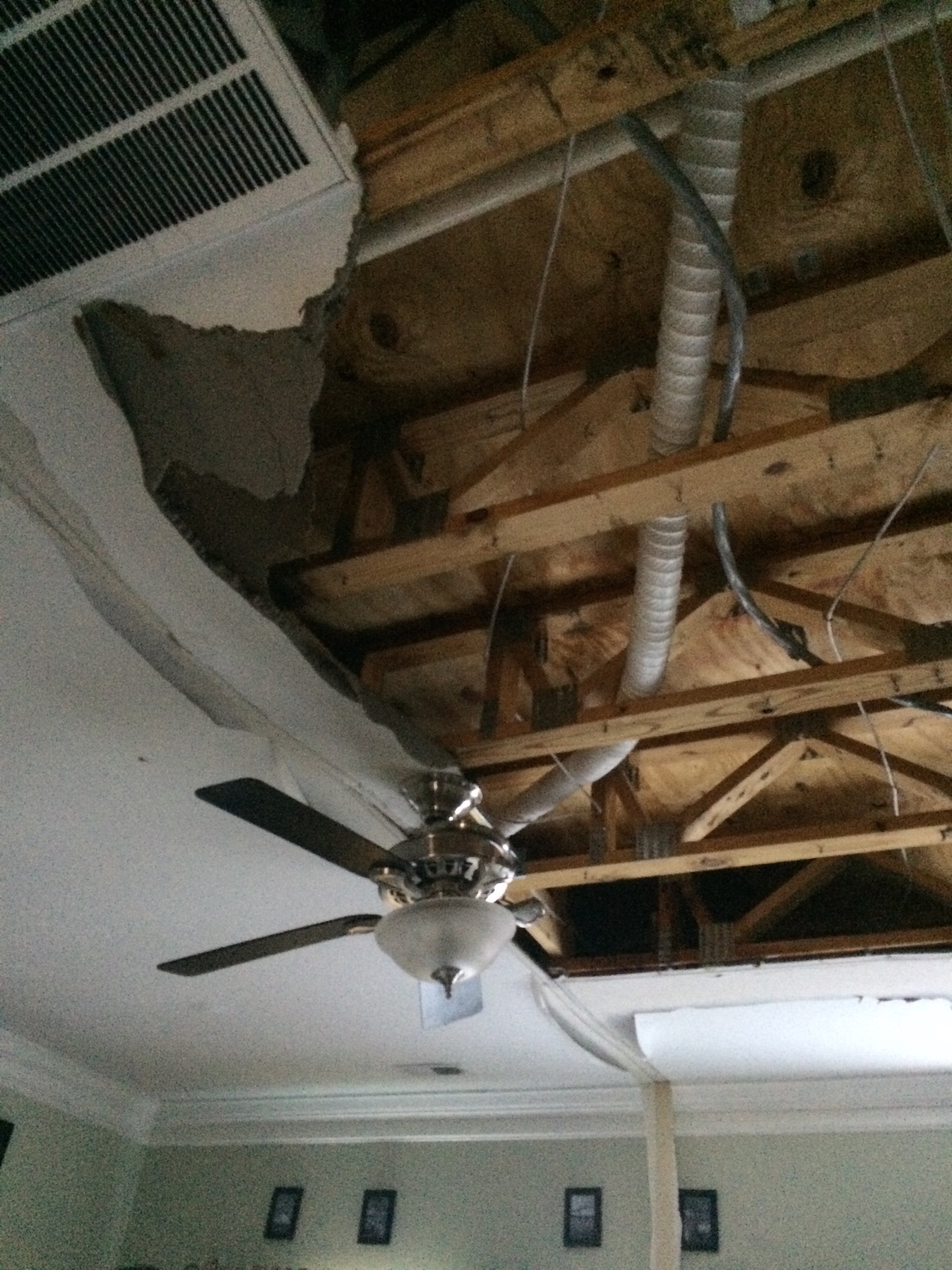 First and foremost, I hope you all had a wonderful Christmas! Ours was… interesting to say the least, which is what this post is really all about. But first, a little background info…

Over the past 2 years or so, TJ has started buying security cameras to keep around the house. I’ve always thought it was a little ridiculous, but I’ll admit that I do think it’s cool to be able to check in on the cats when we’re out of town. Totally not ashamed to admit that we’re those crazy cat people. Anyway, I give him a hard time about the cameras a lot, especially when he insists that we need just one more. (We really don’t).

On Tuesday, we headed out to my parents’ house to get a head start on celebrating Christmas, with the intention of spending the night on both Tuesday and Wednesday, then heading back to our house on Christmas evening. My parents live about 30 minutes away, so it’s nice that it’s not too far. Periodically on Tuesday, we’d check the cameras to see what the cats were up to, and we did the same on Wednesday morning. We checked on them again around 2pm on Christmas Eve, but didn’t see them, which didn’t seem too weird – we just figured they were sleeping in a room without a camera. We checked again around 6pm (told you we were crazy!), and we saw a huge mess on our couch, almost like the living room had been ransacked.

My first thought was that we had been robbed. My second thought was that if we had been robbed, then the cats had probably gotten out. To say my heart dropped would be an understatement. Since it was after the sun had gone down, the infrared lighting was on the camera, and it was hard to tell what exactly was all over the couch. All we could really make out was a bunch of stuff (for lack of a better word) all over the couch, and near a window in the living room.

We immediately left for our house, with my parents right behind us. That 30 minute drive felt like hours, since we were so confused about what could have happened. We could see on the camera that our TV was still in the living room, so my gut was telling me that it wasn’t really a break-in, but I still couldn’t come up with what it actually could be. Plus, the total uncertainty of if the cats were ok was terrifying. We had called the cops on our drive over, saying that we weren’t really sure if we had an emergency on our hands or not, but that if someone had in fact broken into our house, we wouldn’t mind having a little back up.

Once we finally got to the house, we saw that the front and back door were totally intact. That made us feel a little better, but we still had no idea what we might be walking into.

When we walked in, we saw that part of our living room ceiling had collapsed, and what was still in place was dripping massive amounts of water. 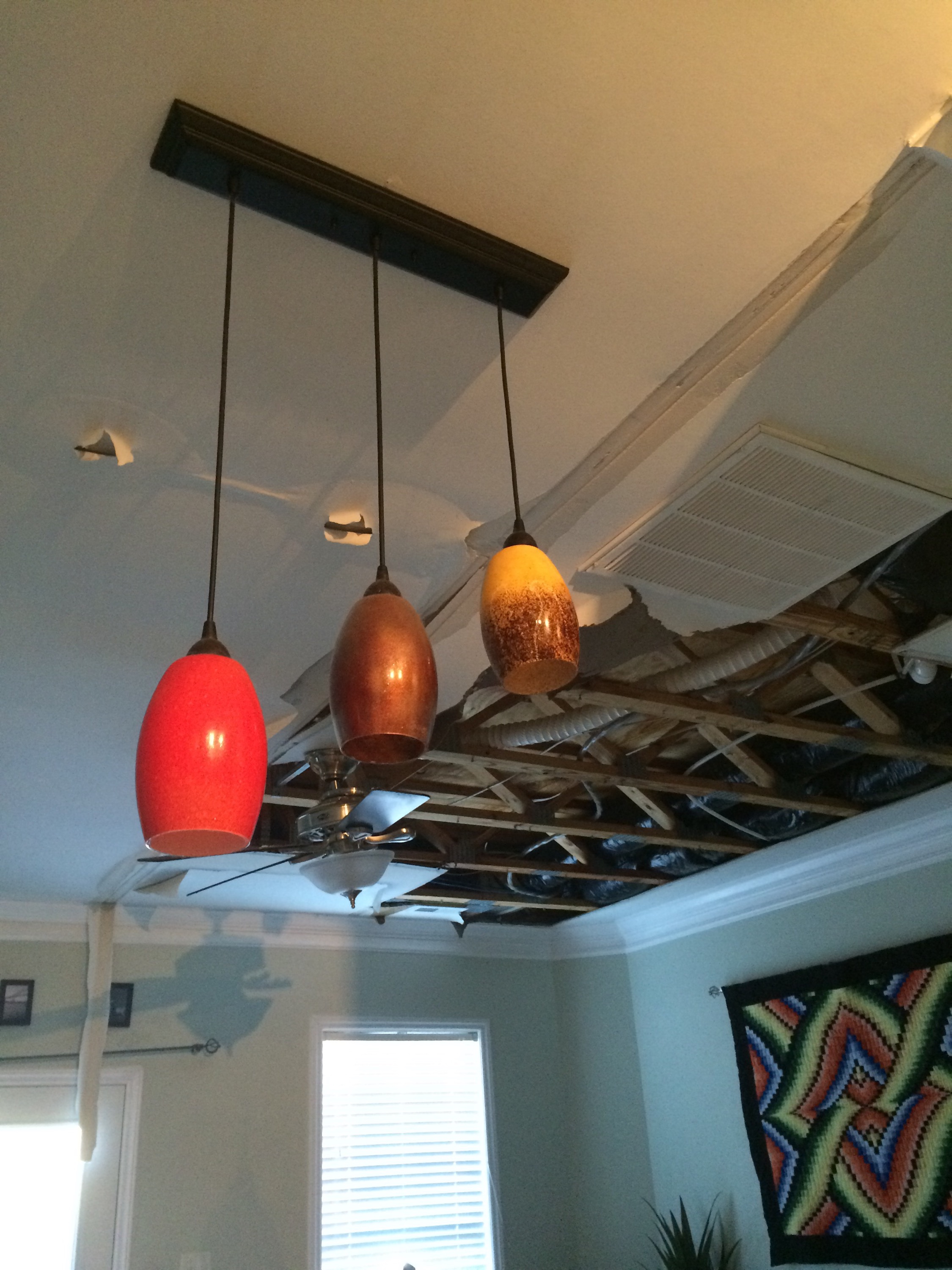 It was like a scene out of a movie, honestly. The sound of falling water in a room that should be dry, the beeping of our smoke detector, and the sight of our house basically in shambles was a lot to handle. I ran upstairs to find the cats next to our bed, in our still mostly dry bedroom. It was a total relief to find them safe, completely unharmed, and in a relatively happy mood. The fact that they’re ok makes all of this much easier to handle.

Our spare bedroom/TJ’s office was so wet that stepping on the carpet caused a huge puddle to form around our feet. The hallway upstairs was also soaked, and it was starting to make its way to our bedroom. Downstairs, the living room ceiling looked like it was going to continue to fall, and almost everything in the room was completely soaked. Likewise, water damage had made its way into our half bathroom and into the kitchen. 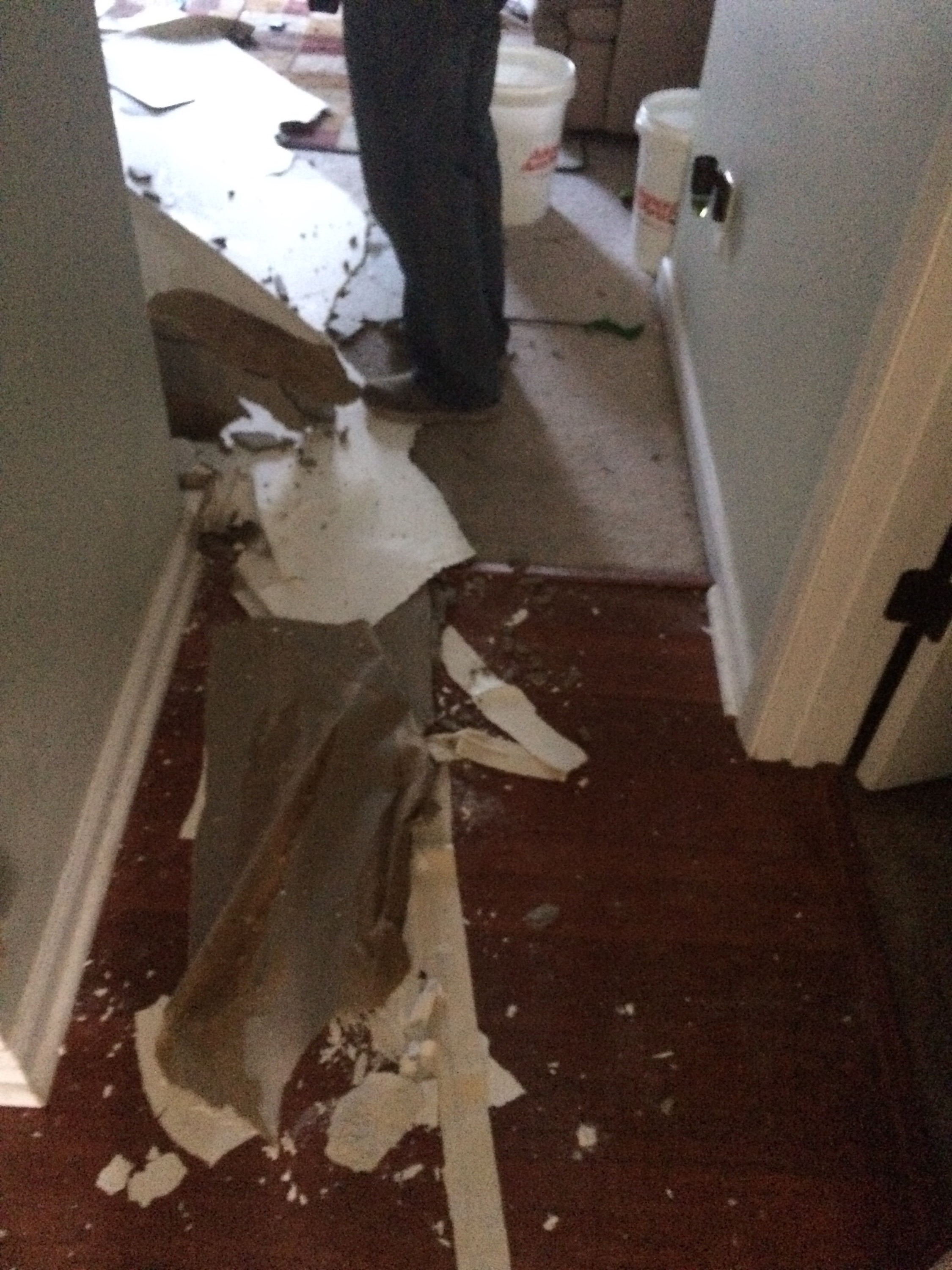 We called the police back to let them know they weren’t needed after all (thankfully!!), and we started getting into action mode, gathering some of our important items, turning off the water, and putting down some buckets to try to catch the falling water. 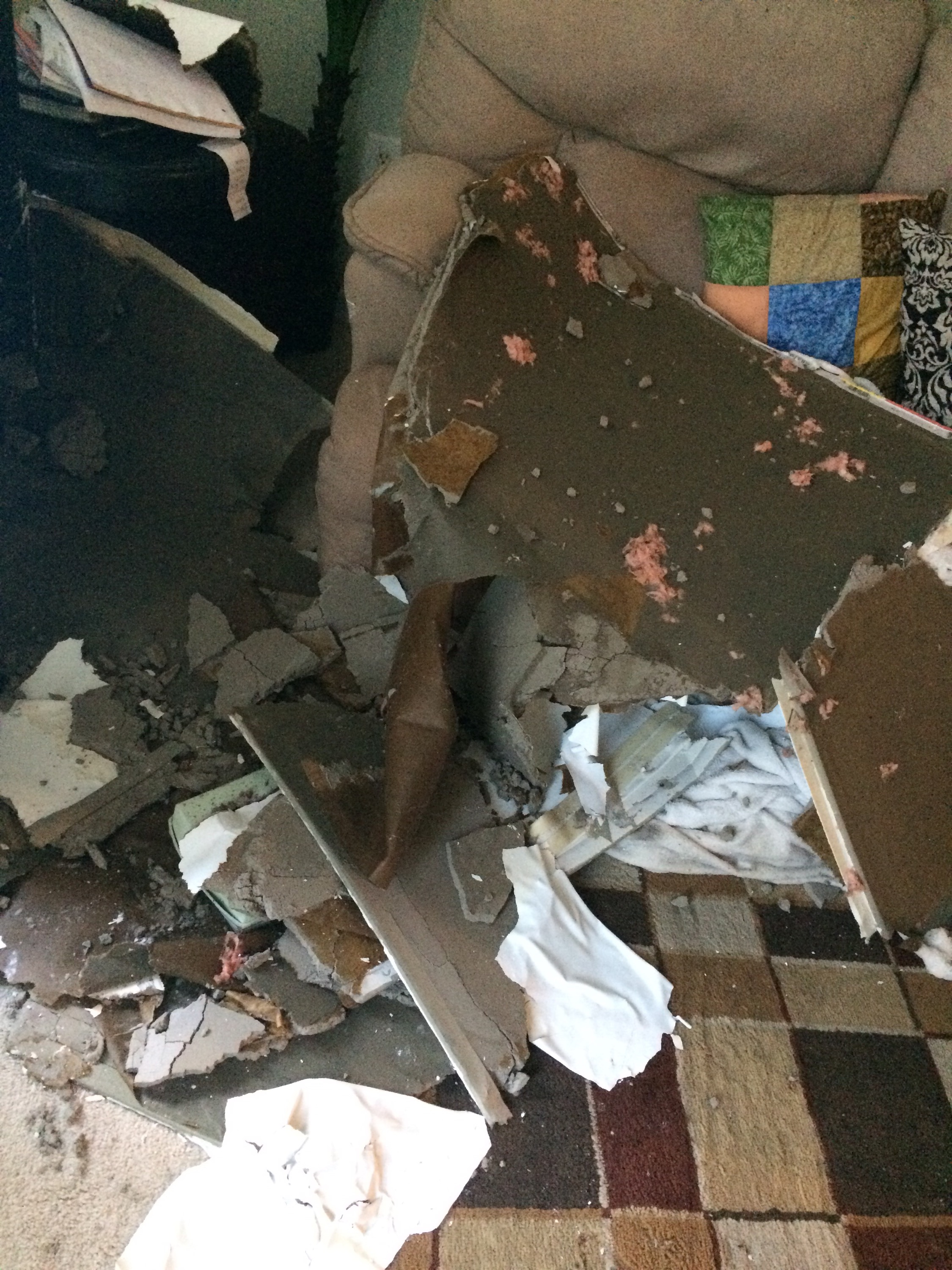 We keep telling ourselves that it could be worse, and it really, really could. We’re safe, our cats are safe, our families are healthy, and the majority of our most valuable items are not damaged. I’ll be honest though, this has been hard. It was not a fun way to spend Christmas Eve, and even now, 5 days later, we have more questions than answers. We’re not sure how much it’s going to cost/how much insurance will cover, and we have no idea what the timeframe for fixing everything will be. 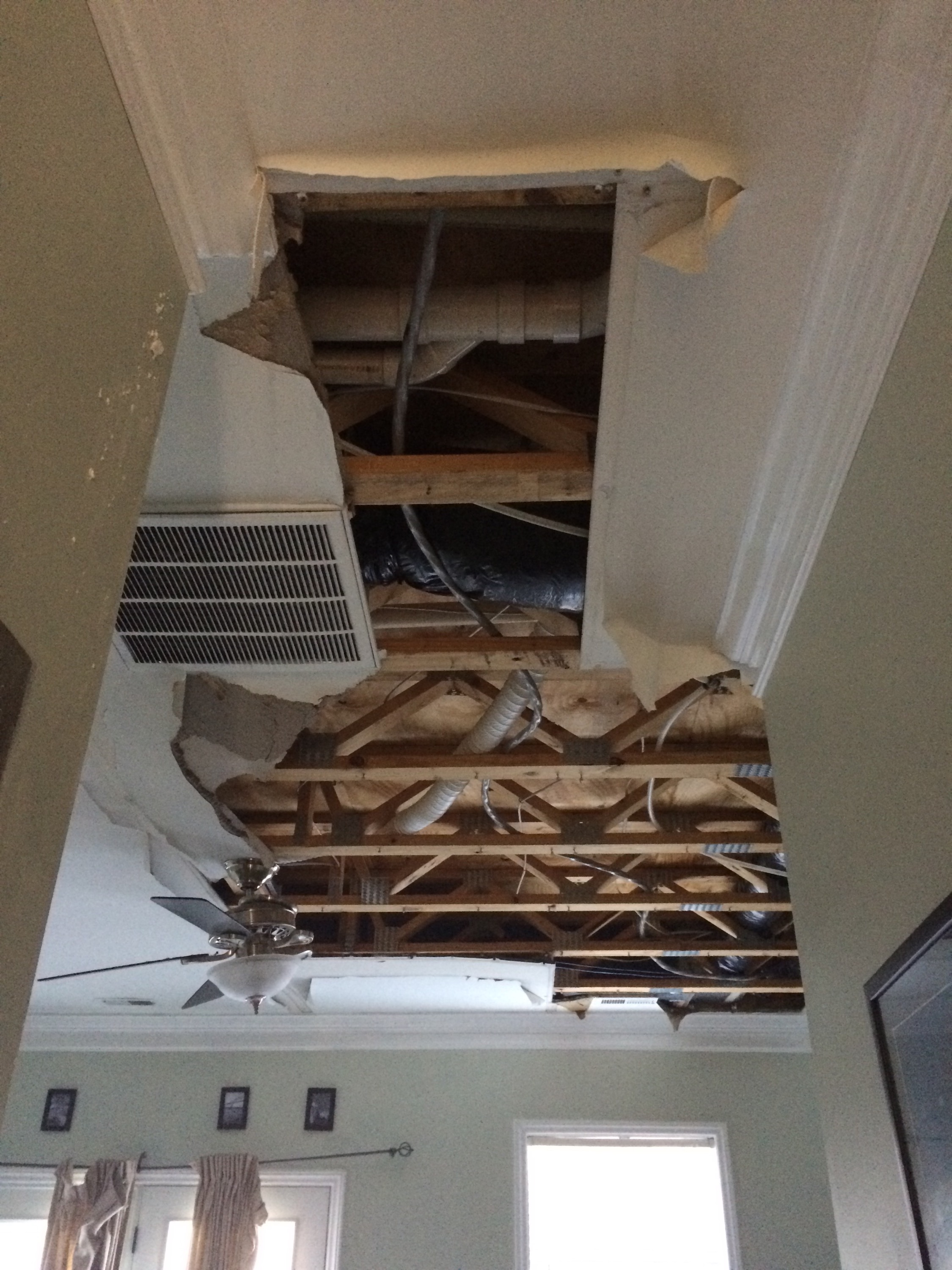 We do know now, that it was caused from a toilet overflowing, apparently because a part had rusted. The toilet never gave us any trouble/made any weird noises/showed any signs of having anything wrong with it, so I think it’s just one of those things that sometimes happens. As far as we know, all of the flooring downstairs and most or all of the flooring upstairs will have to be replaced. There will also be some walls that need to be fixed, as well as the ceiling in the living room. When we went back to the house on Friday, more of the ceiling had fallen, leaving about half of it covering our floor. All of our stuff had to be packed away to a storage facility while the work is being done, and the intense drying process has begun. 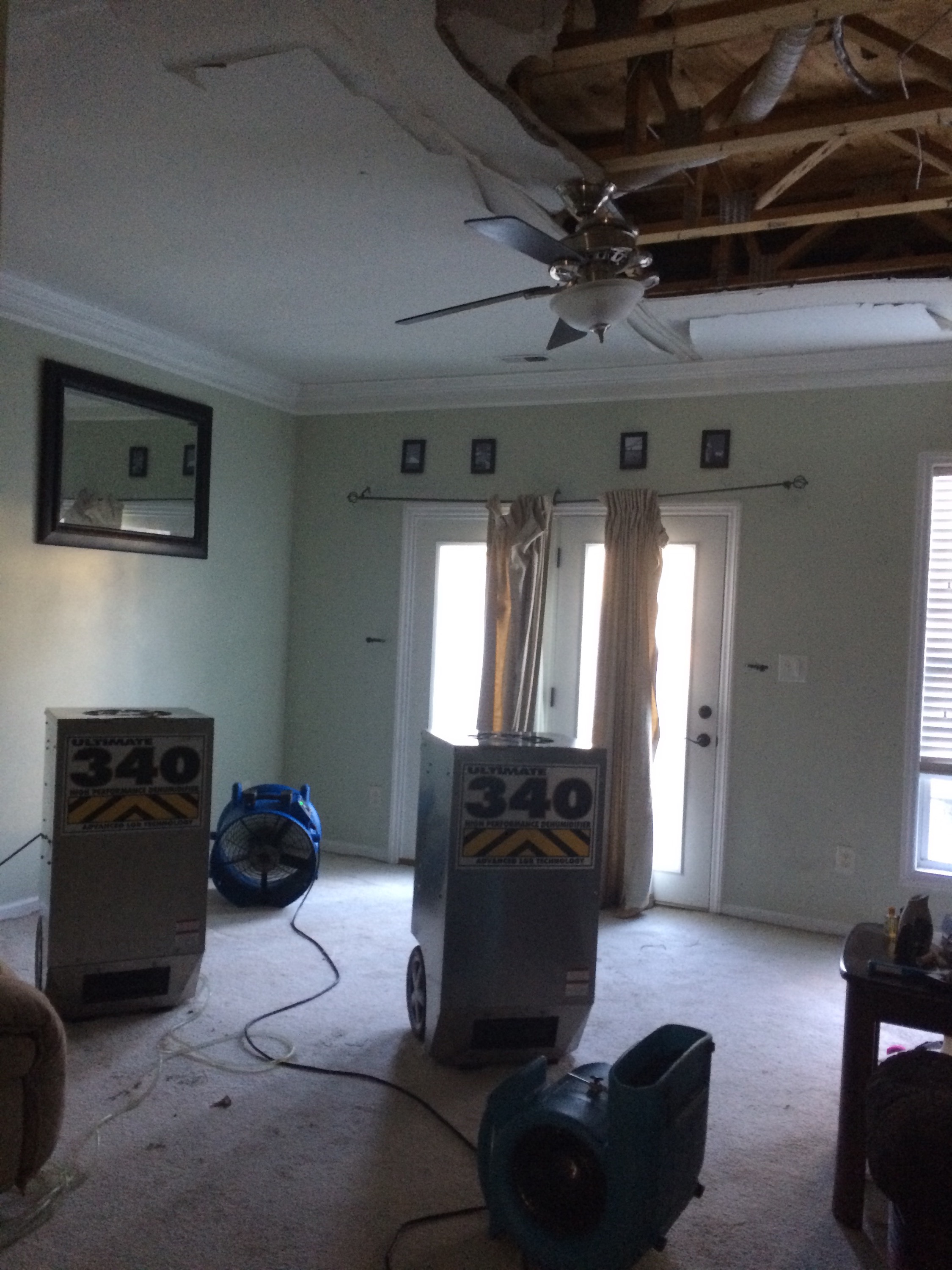 Luckily, my parents have been kind enough to take us and the three cats in while our house gets put back together. I’m so incredibly grateful for them. They’ve made us feel so comfortable here, but at the same time, we still miss our cozy little house. It’s weird, and far from ideal, but it’s happening, and I’ll likely be documenting the process along the way.

Also, my laptop was right in the heart of the “splash zone”, if you will, so posts will be coming from my iPad for the time being, so please excuse anything that looks strange.

Oh, and I’ll never give TJ a hard time about the cameras again – I can only imagine how much more damage would have been done if we hadn’t caught it a full day before we were planning to come home. I can’t even think about it.

Have you ever had any unexpected damage to your house? Did you have a good (and hopefully less eventful) Christmas?