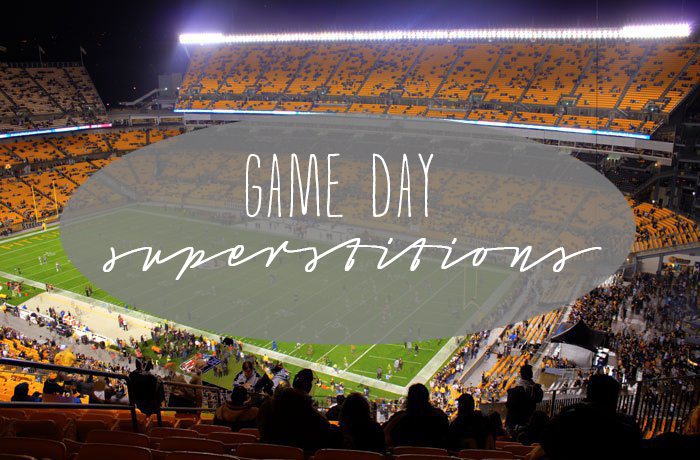 Football is HERE! (Yes, I know that college football has already started, but I’m an NFL fan, so for me, football season starts tonight) Today is the day I’ve been waiting for since the Monday after the Super Bowl. I literally started a countdown on my phone that Monday morning, all in anticipation of tonight, and it’s finally here.

In honor of the start of the season, I thought it’d be fun to talk about game day superstitions. I realize I go a little overboard with these, but I can’t help it. I’m SURE they help the Steelers win, and I’m sticking with them. We all have crazy superstitions (I think? I hope at least, so I don’t feel crazy), so be sure to tell me about yours!

Here are mine:
1. As I mentioned on Instagram last week, I buy a new pair of black earrings at the start of every season, specifically to wear while I’m watching the games. I couldn’t find a pair last year that felt “right”, so I wore my pair from the 2012 season, and just like in the 2012 season, the Steelers went 8-8. I’ll never make that mistake again! You can see my 2014 pair here.

2. I wear the same black tank top under my jersey every week. It’s got a hole in it, but you can’t see it because of the jersey, and I will continue to wear it until it literally falls apart.

3. If I’m watching from home or in person, I keep my terrible towel laid out, with all the wrinkles smoothed out, with the text facing the TV or the field. I don’t take it when we go out to restaurants to watch, because I’m afraid it will get stained. The first year we were dating, TJ spilled coffee on it, and I almost ended it with him on the spot (ok, not really, but I did spaz out, worried that the coffee stain wouldn’t come out – luckily for TJ, it did).

4. I drink Diet Coke (or Coke Zero) during the first half of every game, and Tropicana orange juice with vitamin D during the second half of every game if watching from home. I drink it out of a frosted Steelers mug that my aunt and uncle bought for me while in Pennsylvania. If we go out to watch the game, I just stick to Diet Coke for the whole game. I used to order orange juice too, but we always lost, and I’m positive that it’s because it wasn’t the right brand/kind. I originally started doing this years ago – I did it randomly during one game and we came from behind to win in a killer way. Thus, the tradition stays.

6. I listen to “Don’t Stop Believin'” by Journey every week before the game, because Journey played that song live during the pre-game show of the last Super Bowl we won, after the 2008 season.

7. I wear a small spray of TJ’s Black by Kenneth Cole cologne right after I put on my jersey. Because black is one of the main Steelers colors, obviously.

All right, am I totally crazy? (TJ thinks so, at least when it comes to this stuff) Do you have your own game day superstitions? I want to hear all about them!

Did you catch my post on Chili’s at Home? Check it out!