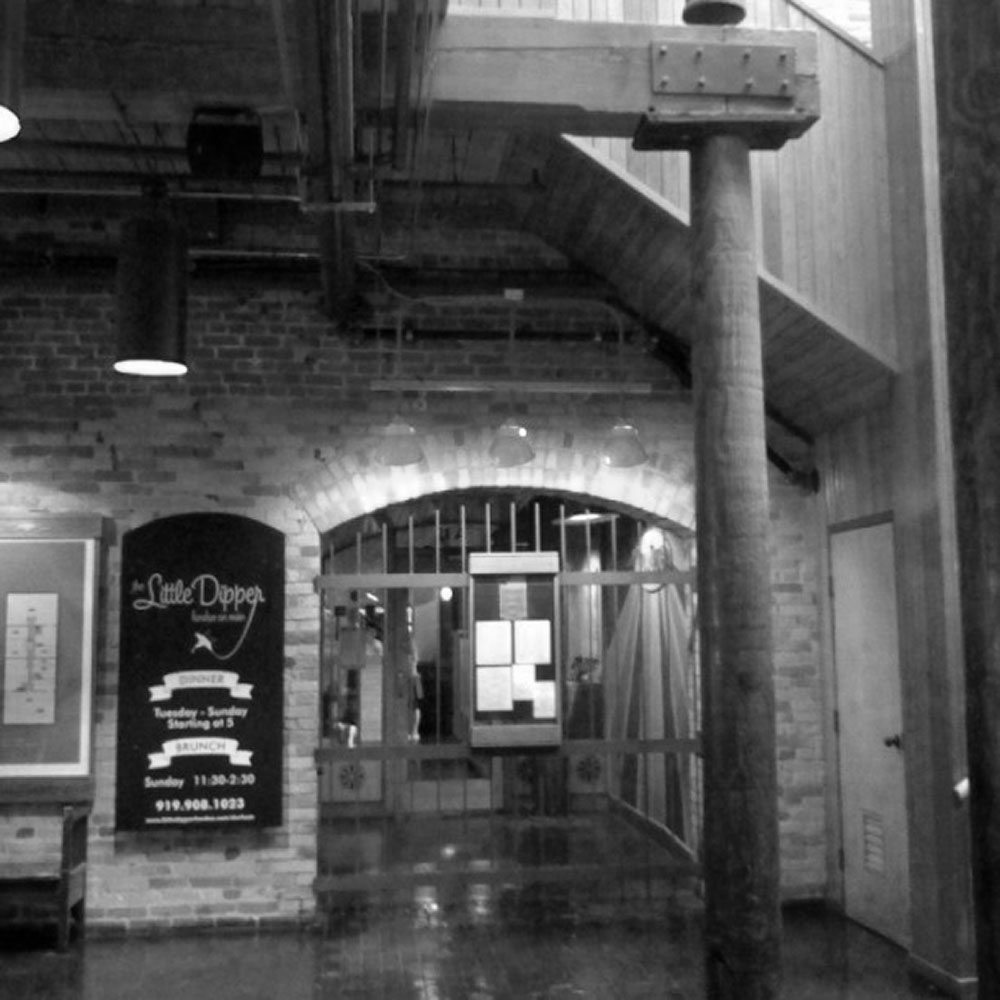 Last Friday night, TJ and I ventured over to Durham, NC to have a fondue dinner at The Little Dipper. I’ve always thought that going to a fondue place would be fun, so when we found a Groupon a few weeks ago, it seemed like the perfect time to try it out. I wasn’t too sure about what to expect (except for lots of melted cheese and chocolate), but it ended up being one of the most fun outings we’ve ever had. 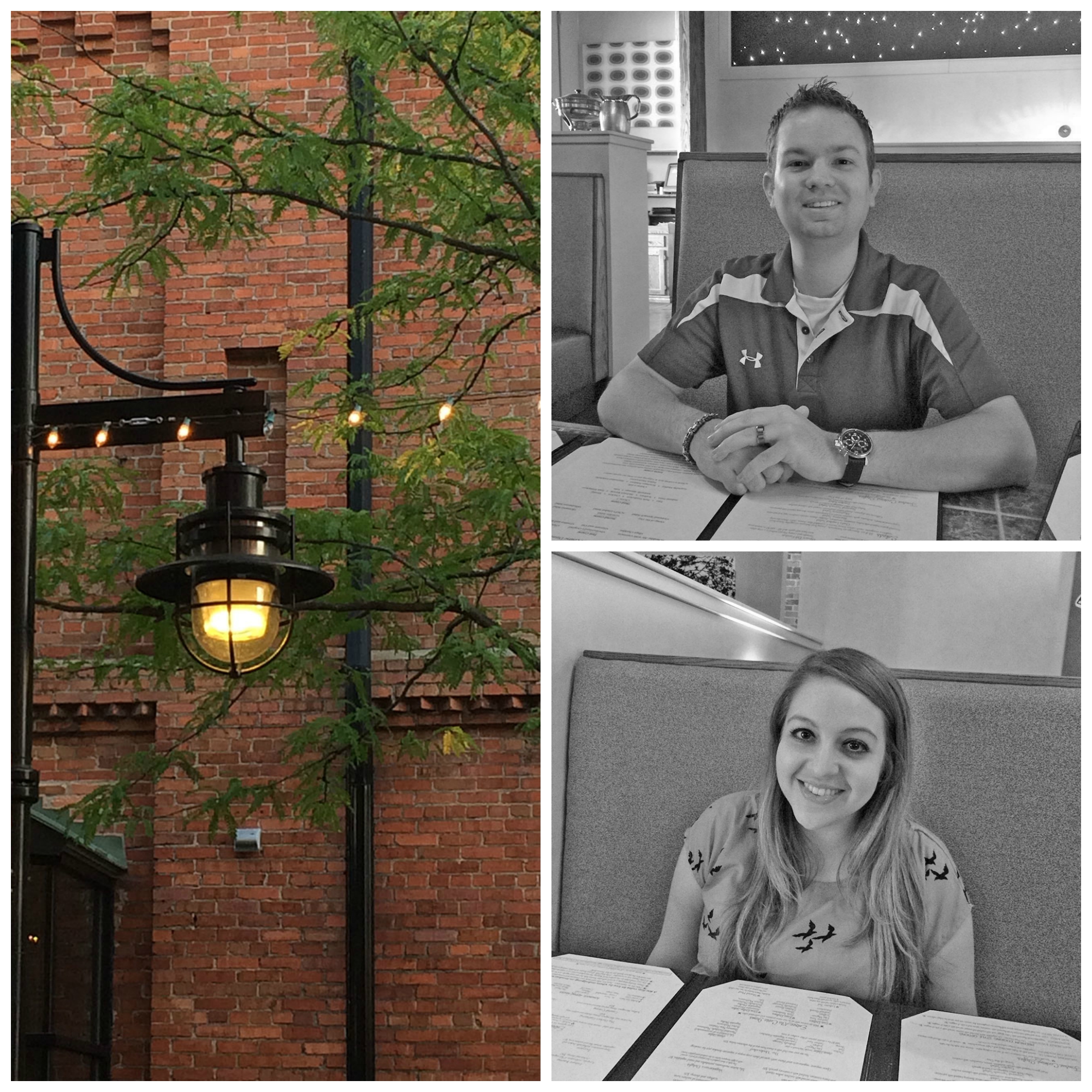 The restaurant is in Brightleaf Square, located on the cutest little street with a bunch of shops, restaurants, and adorable street lights. We made a reservation for 5pm, because we like eating early, and that’s when they open on Fridays. It ended up being a good idea to go early, as the experience lasted about 2 hours. Our waitress (who was amazing, by the way) joked that you have to really like the person you go with, since it takes so long, and that it can make for a really awkward first date.

Our Groupon was for a prix fixe 4-course meal, so we had a really small lunch, because we wanted to have plenty of room for all the fondue goodness. Even so, by the end of the night, I felt like I could never possibly eat again. It’s a lot of food! 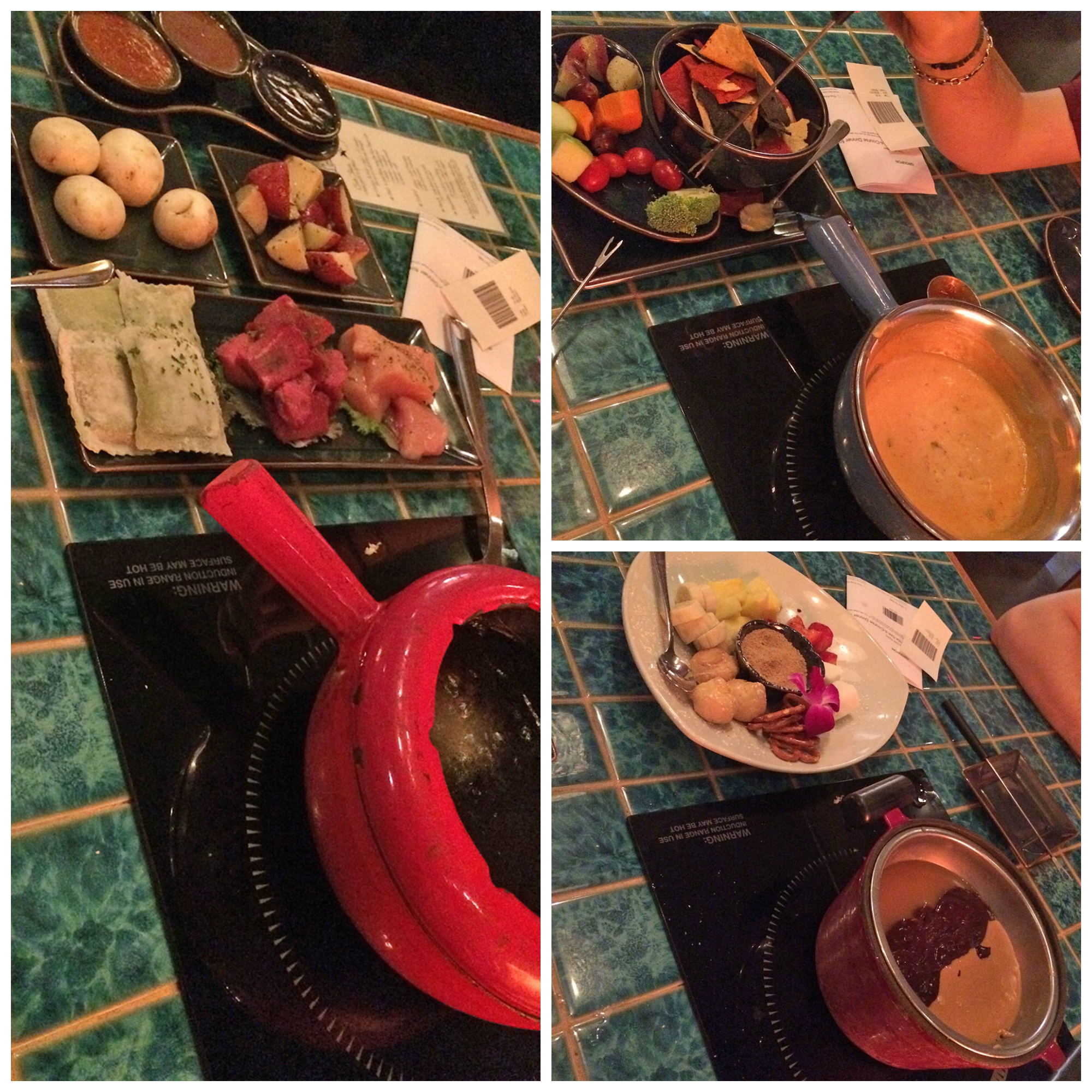 For our first course, we chose the Baja Cheddar Fondue, which ended up kind of being like queso. It was served with tri-color tortilla chips, broccoli, tomatoes, grapes, apples, carrots, and red potatoes. It was delicious, but TJ and I were a little conservative in how much of the cheese we ate, because we thought we’d also be dipping our meats in it. It turns out that you don’t actually dip your meats in the cheese, so now we know that for next time.

The second course was a simple, but really tasty salad. TJ chose the mushroom salad with lemon-basil dressing, and I had the garden salad with balsamic vinaigrette. I forgot to take a picture of the salads, but they were on point.

For the third course, we chose chicken, filet, lemon ricotta ravioli, and rosemary potatoes, in the traditional peanut oil cooking style. For the dipping sauces, we chose buffalo hot sauce, habanero fire, and honey barbecue. The sauces were good, but to be honest, the meat was so good on its own, that we kept forgetting to actually dip them. They also brought out some mushrooms, a cheese filling to turn them into stuffed mushrooms, and tempura batter.

We weren’t quite sure how it would go with cooking our own meat, especially in the dim lighting, but it was actually really easy! We tried everything by itself, and then tried everything in the tempura batter, and it was all so delicious. It’s hard to choose a favorite, but I think the ravioli might have been it. Some of the Yelp reviews I read complained about not getting enough meat in the third course, but honestly, I thought it was more than plenty. We were feeling pretty full at that point, and we still had dessert ahead of us!

Finally, for our fourth course, we chose the Triple Play, which was dark chocolate, caramel, and peanut butter. It came with strawberries, marshmallows, pretzels, cream puffs, bananas, pineapple, and an edible orchid. Again, this course was so delicious, and it was the perfect end to the meal.

We had such a fun (and delicious!) time at The Little Dipper, and we can’t wait to go back!

Have you ever been to a fondue place?