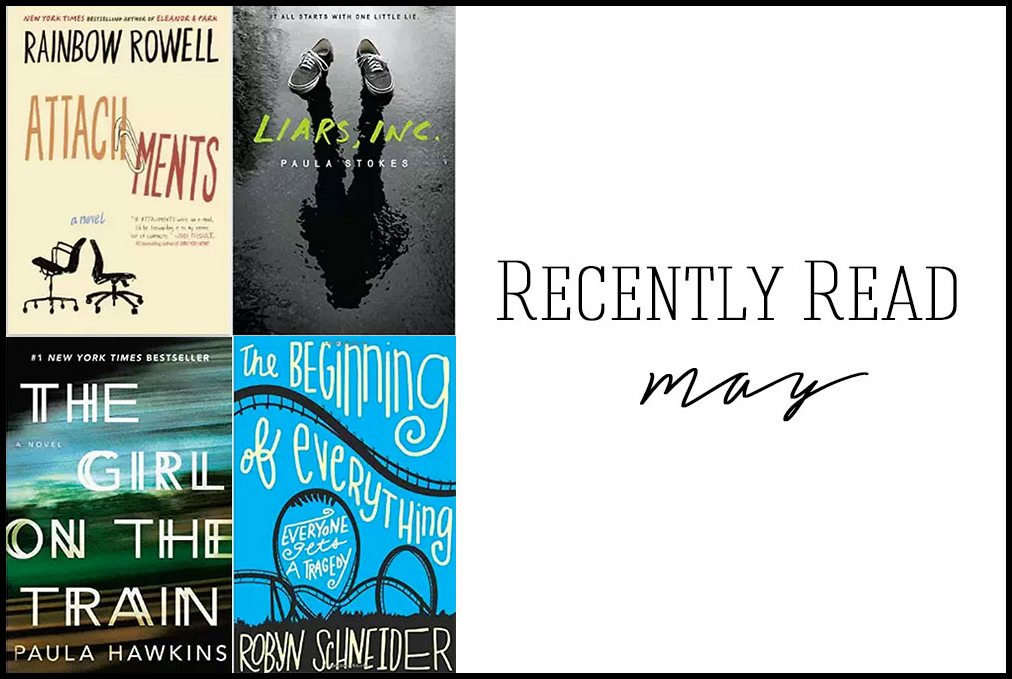 Another month down means another month of reading is in the books. May was kind of a slow reading month for me, but everything I read was good, so I’d call it a success!

Attachments by Rainbow Rowell
I’d heard wonderful things about this book, so I had pretty high expectations going into it. This book takes place in 1999, and centers around a man who has been hired to monitor a newspaper’s email system in the wake of Y2K fears. As he’s doing his job, he begins to read the email correspondence between two women who also work at the paper, and starts to develop feelings for one of them. I don’t usually read books that are set in another time period, but this one worked for me. I loved the emails, and felt like all of the characters were very relatable. I wouldn’t say it was quite as amazing as I’d heard, but it was a really good book that I enjoyed a lot.
The verdict: Read it for sure!

Liars, Inc. by Paula Stokes
I guess this would fall under the YA category, as it centers around a high school student named Max, his girlfriend Parvati, and his best friend Preston. The three of them start a business of sorts, crafting lies and alibis for their classmates. When Preston needs an alibi of his own, Max comes to the rescue. Then Preston goes missing, and things start to get pretty complicated. This was a great read with a good amount of mystery and suspense. I don’t know why I always shy away from YA books, because I’m always so impressed by them!
The verdict: Read this one, especially if you’re in the mood for something a little different and mysterious.

The Girl on the Train by Paula Hawkins
This is another book that I’d heard a lot about, but I kept hearing and reading very mixed reviews. Some people said it’s the next Gone Girl, while others said it’s not worth the time to waste on reading it. I was skeptical going into it, but I really ended up liking it. Here’s the thing: I wouldn’t call it the next Gone Girl, mostly because it didn’t have a jaw-dropping twist in it, and it didn’t just stun me like Gone Girl did. However, this was a good book, with a lot of deeply troubled characters, and it centers around an interesting mystery. I don’t want to go too much into the story, but it follows a disappearance, complicated relationships, and a very unreliable “witness” of sorts.
The verdict: Read it, but don’t go into it with unrealistic expectations.

The Beginning of Everything by Robyn Schneider
Another YA book, another surprisingly enjoyable read. Seriously, when will I realize how great YA books can be? This novel deals with a high school senior named Ezra, who is in a car accident which takes him from being a popular star tennis player to someone who will never play sports again. As Ezra deals with his new life, he meets some new friends, including a mysterious girl named Cassidy who captivates his interest. It took me a bit to get into this story, but once I did, I finished it really quickly, and I loved how it ended.
The verdict: Worth a read, especially if you like YA books.

What’s the best book you read in the last month? Have you read any of the books on this list?