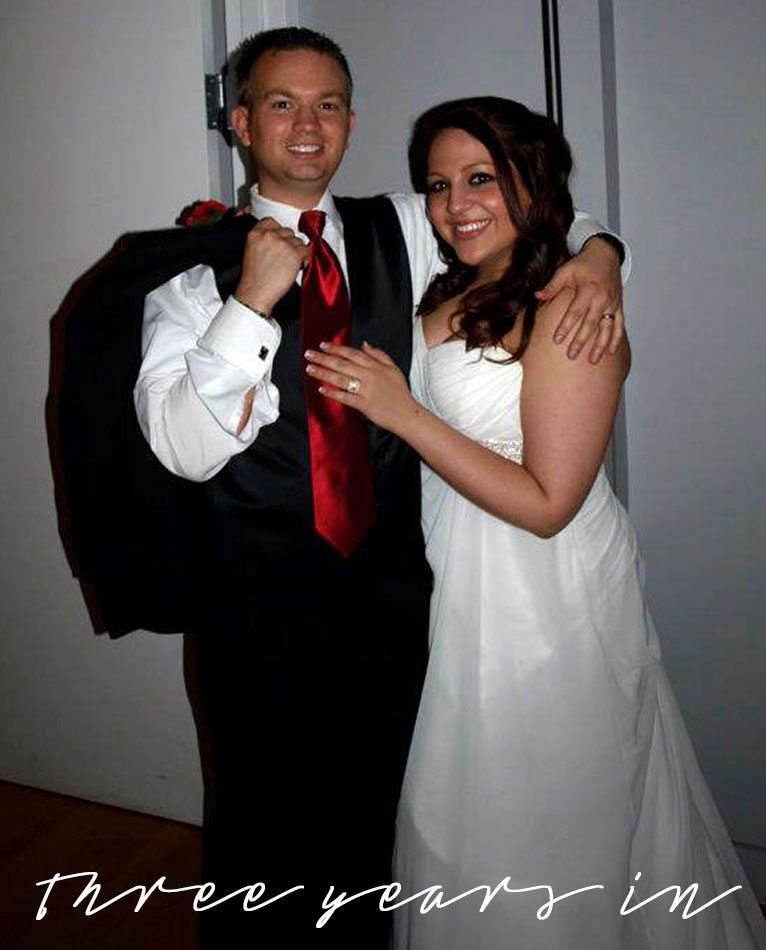 Last Monday, TJ and I celebrated our third anniversary. I think marriage is weird in that at any given moment, it feels like we walked down the aisle yesterday and that I can’t remember ever not being married. Now, I know that in the big scheme of things, three years isn’t very long, but I’m still proud of us, and I really think that every single anniversary deserves to be celebrated. This year, we had an anniversary staycation at hotel here in Raleigh, and we just spent the weekend relaxing, binge-watching (of course!), and doing some swimming. It was perfect for us.

I thought I’d write a little today about what I’ve learned in just over 1100 days of marriage. This isn’t an advice post (Can anyone really give marriage advice? Each individual marriage is so unique!), but more of a look back on what I’ve personally learned, and some of the things we’ve been through that have taught us those lessons.

I think, in our marriage at least, each year tends to have some kind of theme. Our first year of marriage (2012) was one of the best years of my life, and I think the theme was “bliss.” That should seem obvious, right? I mean, we were newlyweds! Of course it was all blissful! But it was more than just that – everything in our lives seemed to be going our way. We had good jobs, and made pretty decent money, our families were healthy, we went on a couple trips. In a nutshell, life was good.

Then, 2013 started, and for the first 5 or 6 days of the year, every single day we found out about someone dying. TJ’s childhood dog died and then his uncle passed away a few days later, followed by a few friends of friends who also passed on. It wasn’t a great way to start off the year, and as 2013 went on, we just kind of felt like we were always waiting for the other shoe to drop. Then, in November, TJ lost his job, which was a huge shock, and he started up his own company. That ended up working out for the best, but for the first few days, we had no idea what was going to happen. I think the theme for our second year of marriage was “uncertainty” – not in our love for each other (never that), but just uncertainty in what would happen next.

Then 2014 started, and we kept saying, “hey, it’s gotta be better than 2013, right?” HA. At first it was better – TJ’s company started to stabilize and was doing well, and we spent our 2nd anniversary celebrating in Chicago. Then, in May, almost 6 months to the day after TJ lost his job, I got laid off. Again, this was a huge shock – I didn’t see it coming at all, and it felt very scary to know that in a matter of months, we had gone from having two reliable incomes down to one slightly unpredictable one. Fast forward three months later, and we were in the middle of a health scare for my dad (thankfully, he ended up being ok). It was just a lot to deal with all at once, but we kept on trucking. It wasn’t without its stress, but we were starting to feel ok about things toward the end of the year. Then on Christmas Eve, our house flooded, and I think we just kind of felt like we couldn’t deal with much more. I mean, we are homebodies in every sense of the word, and all of the sudden, through no fault of our own, we couldn’t even go home anymore. It was hard, grappling with everything that comes with a house flood, especially after a year of other hardships. And to top it all off, in the middle of moving into our temporary apartment, one of our cats (Owen) started having some intestinal health issues that were stressing him and us out (luckily, after a couple trips to the vet and a prednisone prescription, he’s doing so much better!)

But you know what, throughout every single ordeal, we never turned on each other. We always figured out a way to get through it together. We celebrated the little victories together, and voiced our concerns about the hard times to each other. We found things to laugh at, when nothing seemed funny, and we supported each other when one of us felt like we couldn’t handle one more thing. The theme for our 3rd year of marriage was “just keep going, together.” Our marriage isn’t perfect (whose is?), but it’s strong, and I’m fiercely proud of it.

I’m not sure what the theme for our 4th year of marriage will be, and I’m not naive enough to think that 2014 will be the hardest time of our lives. There are many joyous and heartbreaking situations that we can’t even imagine still ahead of us, but we know, without a doubt, that we can make it through anything, as long as we have each other.

What have you learned from marriage?