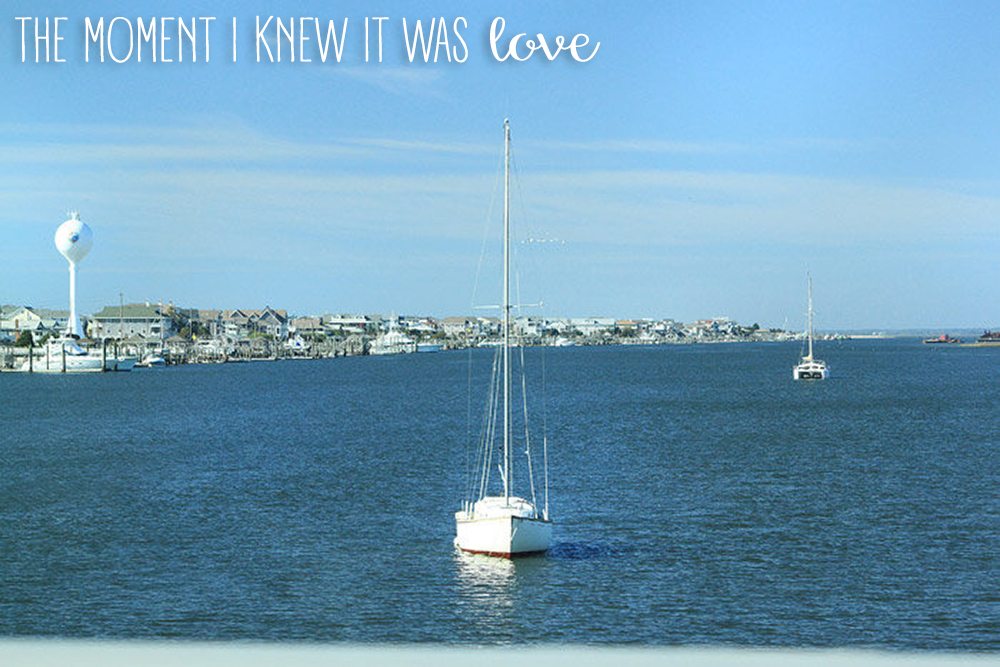 With our third wedding anniversary coming up in 5 days (seriously, where does the time go?!), I thought it’d be fun to write about the very moment that I first knew I was in love with TJ, and that I’d be in it for the long haul with him. If you’ve read our love story, then you know that we met at work, and took things pretty slowly to begin with. As the months went on, we went from hanging out about once a week to seeing each other several times a week, and slowly letting some of our friends from work know that we were dating.

Around mid-June 2010, we decided to take a day trip to the beach in Wilmington with one of our coworkers. It’s about a 2 hour drive from Raleigh, and I volunteered to drive – 1. because I think road trips feel faster when I’m the one driving and 2. because I wanted control of the music (I chose The Black Keys Brothers album, if you’re interested). The drive there wasn’t too memorable, and the time spent at the beach was pretty typical. We spent a little time in the water, a lot of time laying in the sun reading (I randomly remember that I was in the middle of Fight Club that day), and just generally relaxed for hours and hours. We didn’t bring any food with us, but I think we grabbed a granola bar or something from one of the little shops near the beach. Some words of wisdom: it’s not a good idea to spend hours out in the blazing hot sun with nearly nothing in your stomach. By the time we decided to leave the beach, it was around 6pm, and TJ and I both had headaches. We took some medicine (again, on a nearly empty stomach – BAD IDEA!), and stopped by The Pilot House for dinner before driving back to Raleigh.

Shortly after we sat down and ordered some water, TJ started feeling really bad. I figured that he might just need some food, so I just kind of held his hand and hoped that the food would arrive quickly. Unfortunately, dinner didn’t help – he just kept feeling worse and worse, and he didn’t look great. His stomach was killing him, he was sweaty and pale, and I felt horrible that we still had a 2 hour drive home. After dinner, he kept getting worse, so we started the drive back, and things just kept going downhill. He was laying down in the backseat, drinking some water, still so hot and sweaty, when all of the sudden, my AC stopped working. Yikes. He noticed immediately, and I think that started to send him (and me) into panic mode. He was already so hot with the AC blasting – how could he start feeling any better with no cool air hitting him?

Throughout that drive home, we ended up stopping at probably 3 or 4 different gas stations, all in the middle of nowhere. I tried to give him everything I could think of to help him feel better – gatorade, a big glass of ice, etc, but he just kept getting sick every time we stopped. Eventually, toward the end of the trip, the gatorade seemed to start to help, and once we dropped off our coworker at her car, we went back to my place. I remember him laying down on the couch, his feet in my lap, him finally starting to feel better and watching Seinfeld. I looked at him, and it just hit that I had never cared so much before about how someone else was feeling. I wanted to do everything I could to make him feel better, and even though I was hot and uncomfortable myself on that drive home, I couldn’t care less about myself until I knew that he was going to be ok. In that moment, I realized what it was like to be selfless, and care more about someone else than I do myself.

I looked at TJ, recovering and laughing at Seinfeld, and he looked at me, with a look in his eye that said exactly how thankful he was to have me there when he felt his worst, I and knew for certain that I loved him, and that we had a real future together.

Oh, and nearly 5 years later, we’ve yet to go back to the beach – which is fine by both of us.

Do you have a specific moment where you knew you were in love? Has a trip to someplace fun ever turned into something crazy?