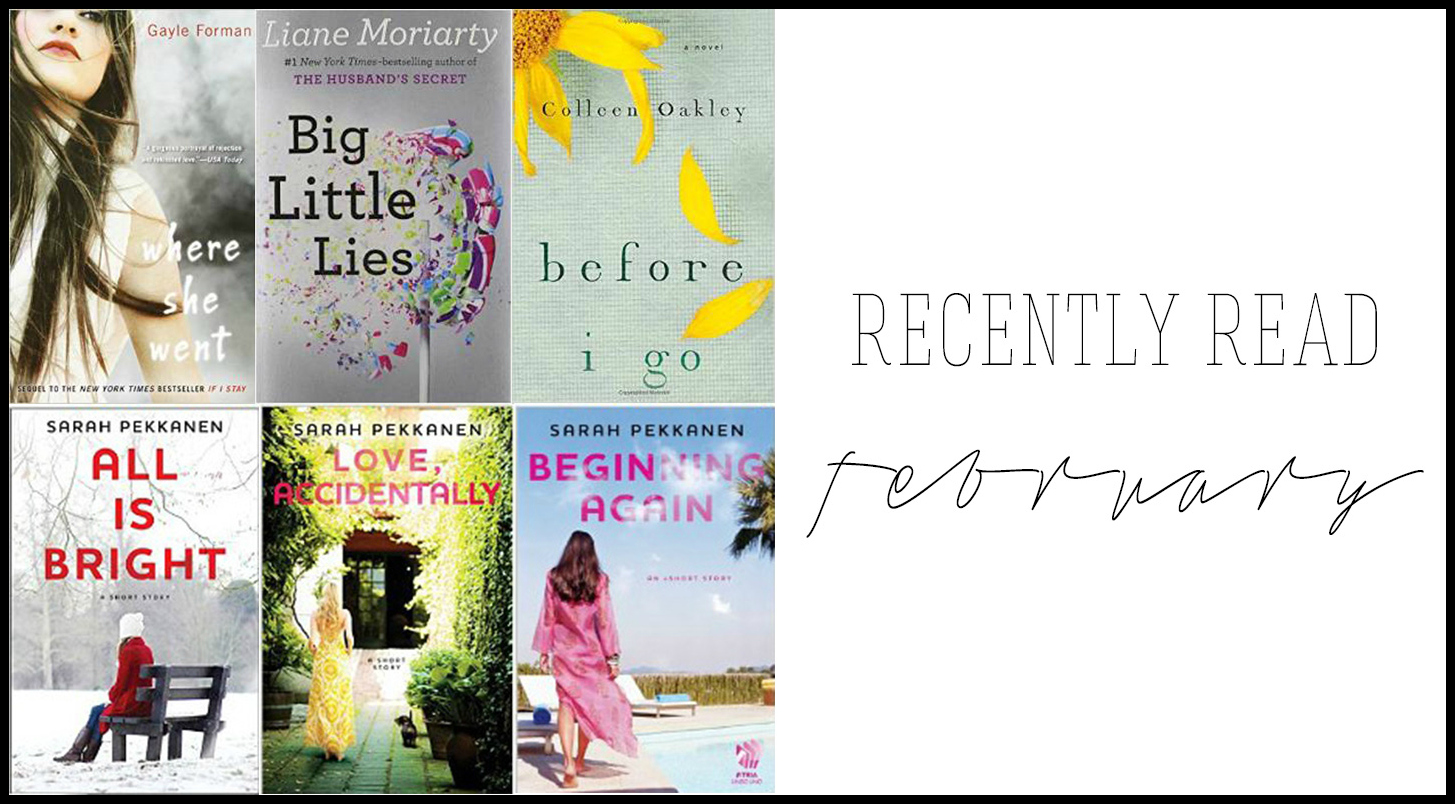 February didn’t start out great for me, reading wise, but towards the end of the month, things finally started to pick up. Also, don’t let 6 books up there fool you – 3 of them are short stories, so I didn’t actually read as much as it looks like I did.

Where She Went by Gayle Forman
This is the sequel to If I Stay, which I talked about in last month’s recently read post. I liked this book a lot – it was told from the perspective of the boyfriend of the main character in If I Stay and it took place a few years later. It was a quick read (it took me about 2 days to finish), and I liked that it gave a little more insight into another character.
The verdict: If you read If I Stay, then reading this one is a given.

Big Little Lies by Liane Moriarty
This is the book that gave me the most trouble this month. I’ve read several other books by Liane Moriarty, and I’ve loved them, but for some reason, I was having a hard time making myself read this one. When I did make myself read it, I liked it a lot, but it wasn’t until I was about 3/4 of the way through that I got really into it and had a hard time putting it down. The book revolves around a group of kindergarten moms and a mystery crime that occurs during a school trivia night.
The verdict: I would recommend this book for sure, because, like I said, I did really enjoy it – just don’t be surprised if it takes a while to get super into it.

Before I Go by Colleen Oakley
This was my favorite book of the month. The novel follows a 27 year old wife who is diagnosed with terminal cancer and sets out to find a new wife for her husband. The story was full of emotion, and at times, I felt like I was living her journey with her. I don’t really get too emotional while reading, but there were several times that I found myself deeply sighing from the weight of everything this character was dealing with, and I think it will be a book that stays with me for a while. This was a super quick read that only took me a few days to get through.
The verdict: Definitely add this one to your list and let me know if you like it as much as I did.

All is Bright, Love, Accidentally, and Beginning Again by Sarah Pekkanen
Since the month was almost over when I finished Before I Go, I wanted something quick to read to finish off February, so I opted for a set of three short stories. The first, All is Bright, is about a woman named Elise whose longtime boyfriend/childhood friend has recently moved on with another woman named Ilsa. Love, Accidentally is told from Ilsa’s perspective, and Beginning Again is told from Ilsa’s sister, Corrine’s perspective. I’ve been a fan of all of Sarah Pekkanen’s novels, and all three of these short stories were great. I enjoyed reading from each of the three different perspectives, and they were so short that you could easily read them all in one afternoon.
The verdict: Absolutely read these, especially if you’re looking for something quick to blast through. Bonus: All is Bright and Love, Accidentally are both free on Amazon Kindle, and Beginning Again is 99 cents, so you really have no reason not to read them!

What’s the best thing you read in February? Have you read any of these books? What are your thoughts on short stories?