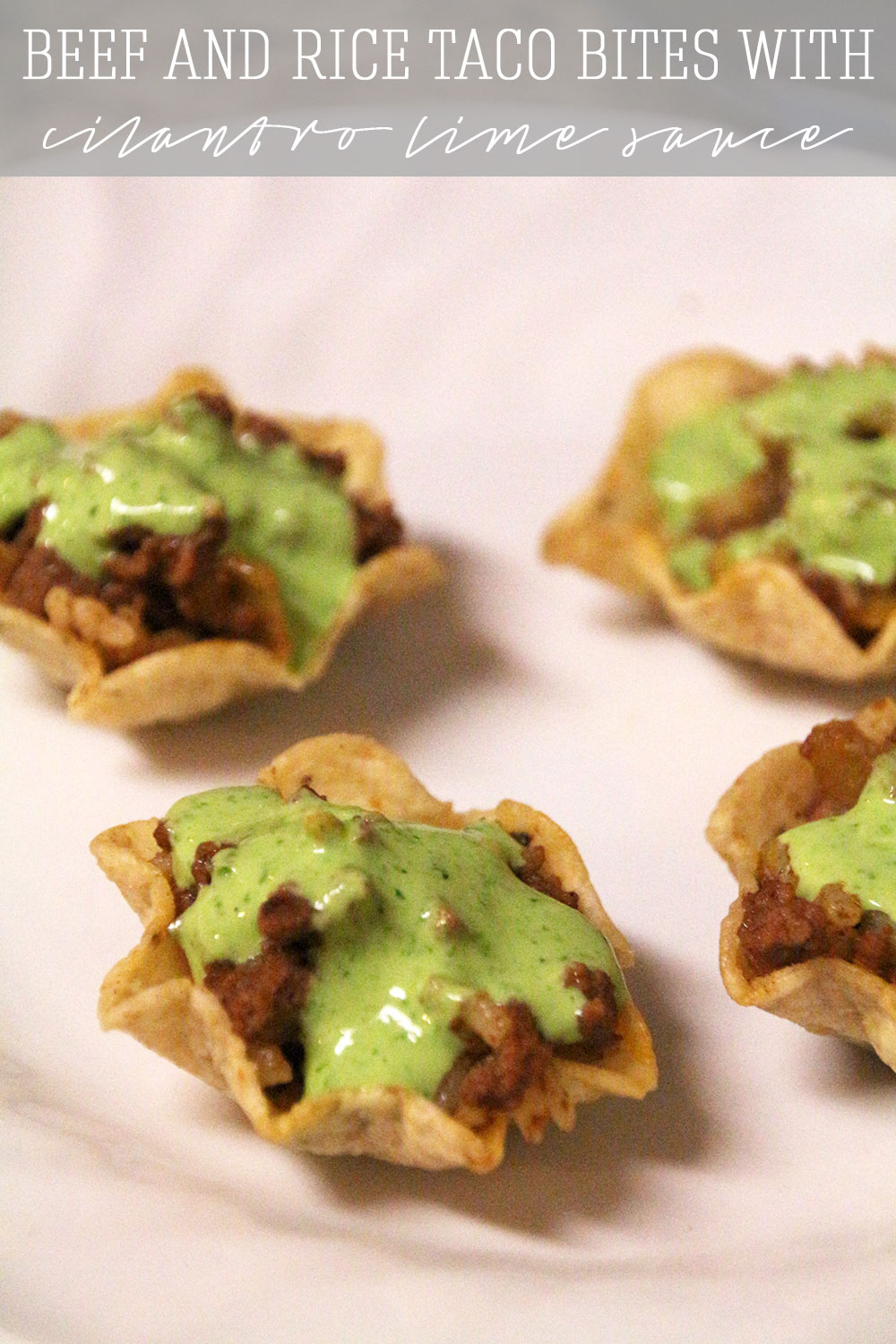 We’re another day closer to Super Bowl Sunday, so naturally I’ve got another Super Bowl recipe to share with you today! The idea for these came from two of my favorite things: the filling is adapted from a stuffed peppers recipe that came in a Blue Apron box, and the cilantro lime sauce is similar to a sauce we get at one of our favorite restaurants, Guasaca. I had the idea to put those two things together in one recipe and the result was amazing! I feel like I constantly say that the recipe I’m posting is my “new favorite thing ever”, but this really might be my new favorite. To prove it: I made this on Tuesday night for dinner, and I think we’re having it again tonight. It’s SO good.

Another note about this filling – it is so much better than just regular taco meat. The rice gives it a nice texture and it also fills you up faster so you don’t eat as much, and the spices in the mix taste so much fresher than a packaged taco seasoning. Does it take longer to make than mixing ground beef with packaged seasoning? Yes. Is it 100% worth it? ABSOLUTELY. Make it – you won’t regret it!

Also, if you don’t feel like filling each individual chip with the filling, it’s also totally acceptable to just mix the cilantro lime sauce into the meat mixture and eat it as a dip with the chips. It cuts out time and it still tastes just as delicious. (Seriously, I filled about 10 of the chips for the pictures for this post, and then TJ and I just ate it as a dip from there and it was perfect). So, serve it however you want! 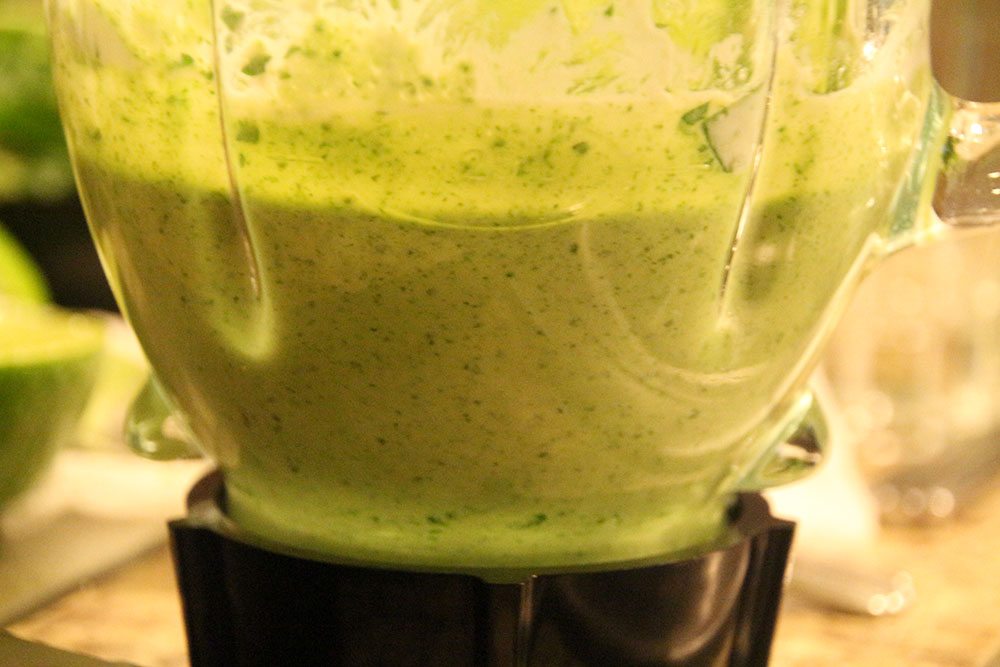 Place the sauce in the fridge and begin making the filling. Fill a pot with the rice and 1 cup water and boil. Once boiling, cover and simmer on low for about 15 minutes or until the liquid is absorbed. Fluff the rice with a fork and set aside. 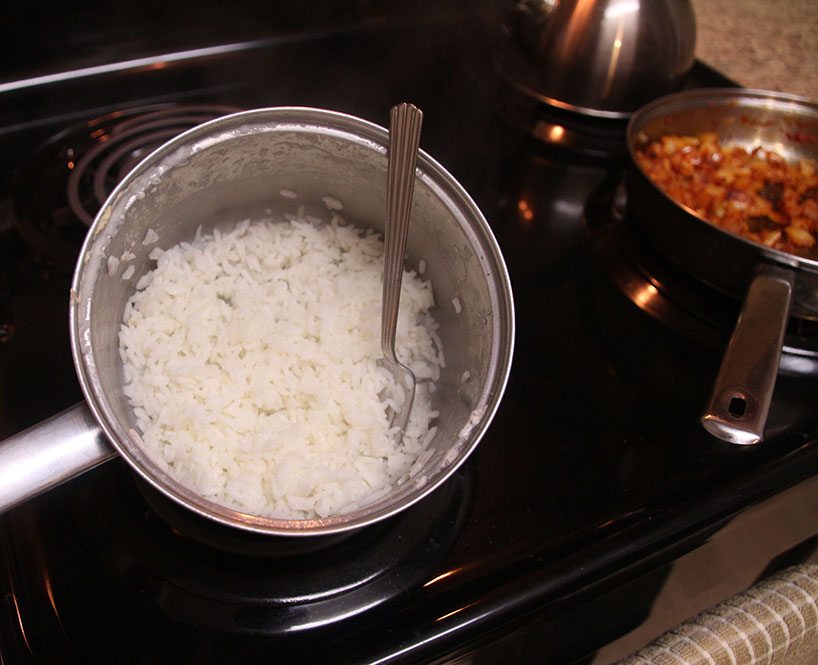 While the rice is cooking, heat the olive oil in a skillet until hot, then add in the chopped onion and cook for 2-4 minutes, or until tender. 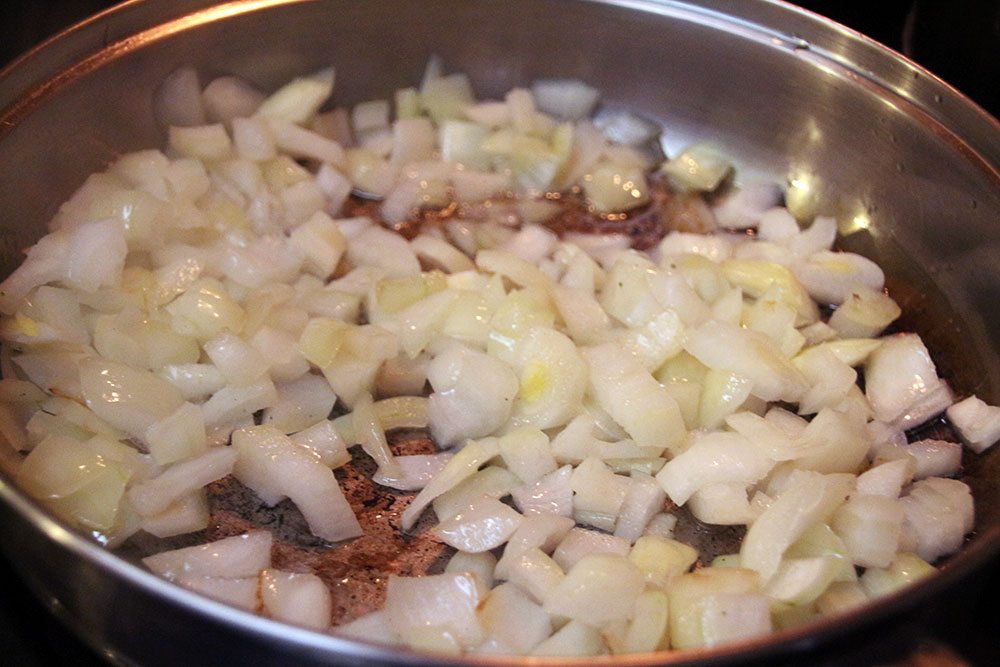 Add the tomato paste, cumin, and garlic salt and stir until well combined. 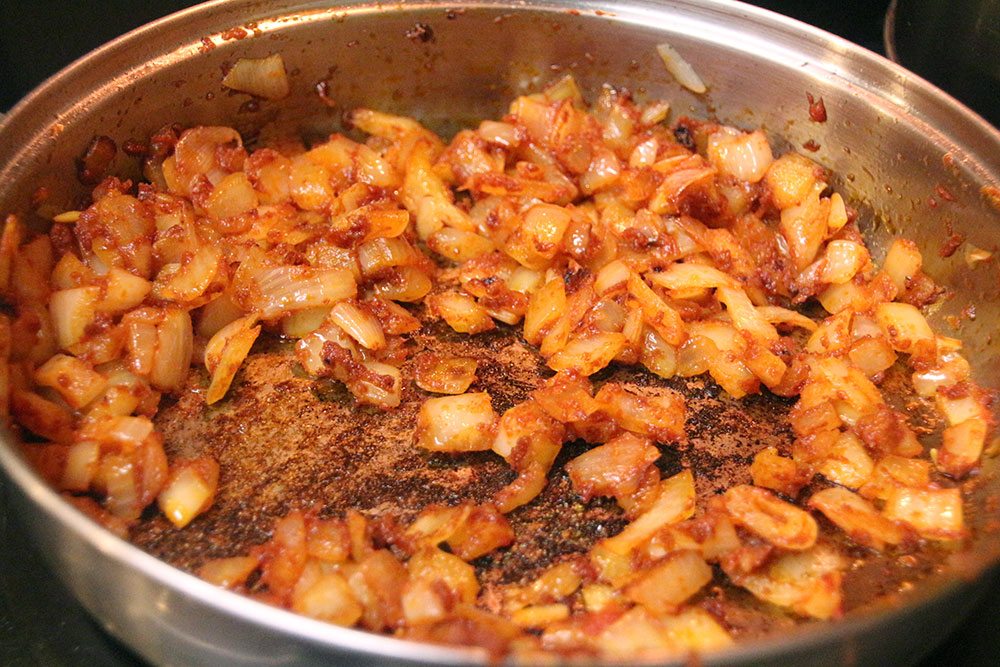 Add in the ground beef and cook for about 5 minutes, or until it is no longer pink. 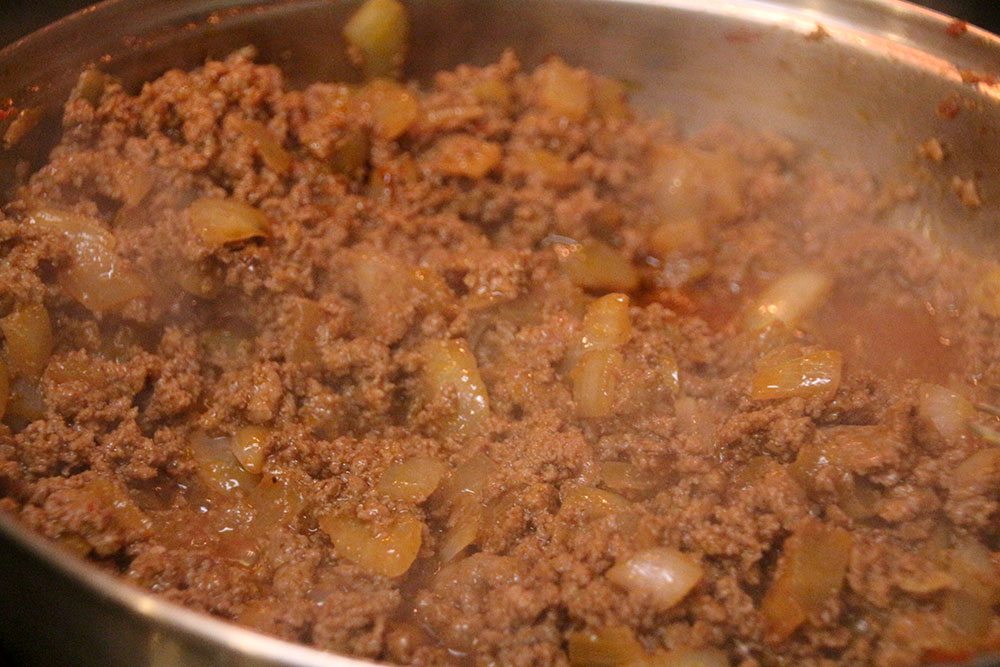 Stir in the rice, 1/4 cup water, and add salt and pepper to taste.  Cook, stirring until well combined for 2-3 minutes. 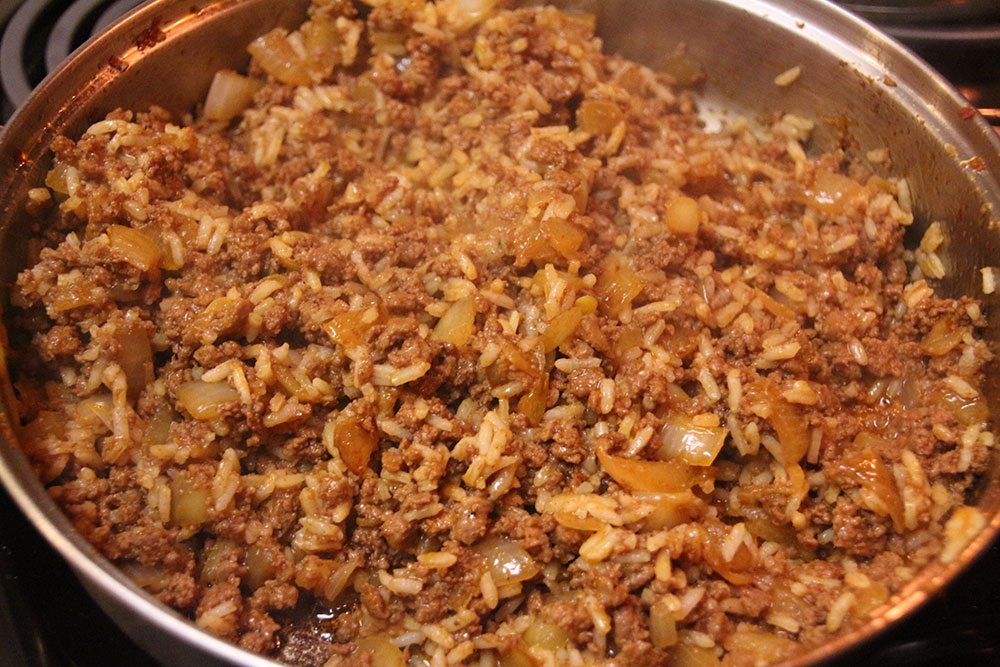 Line the chips on a plate and spoon the filling into each chip. 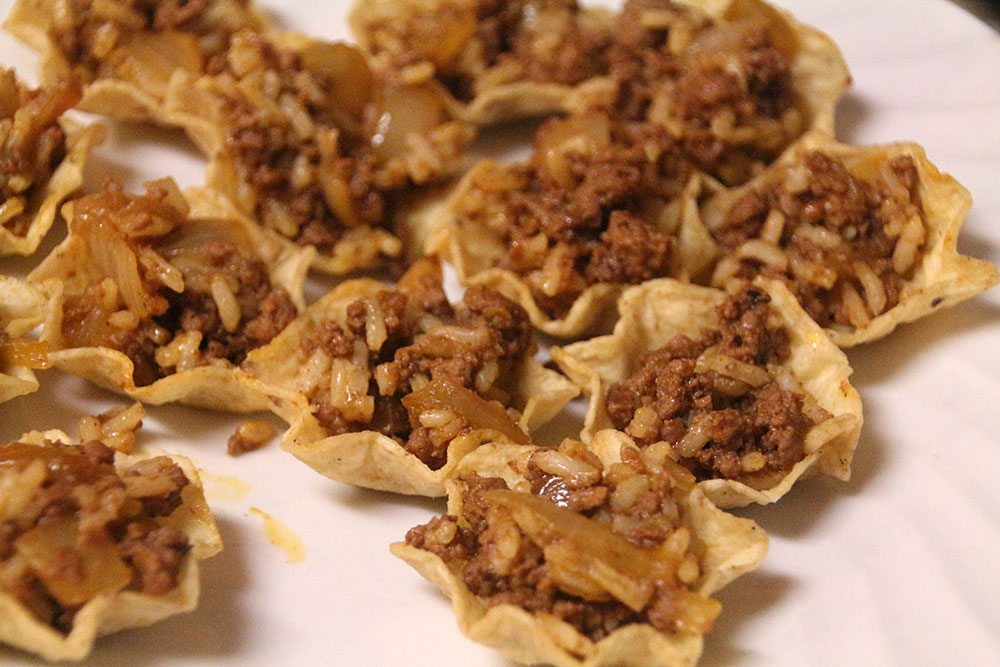 Drizzle the cilantro lime sauce over the taco bites. 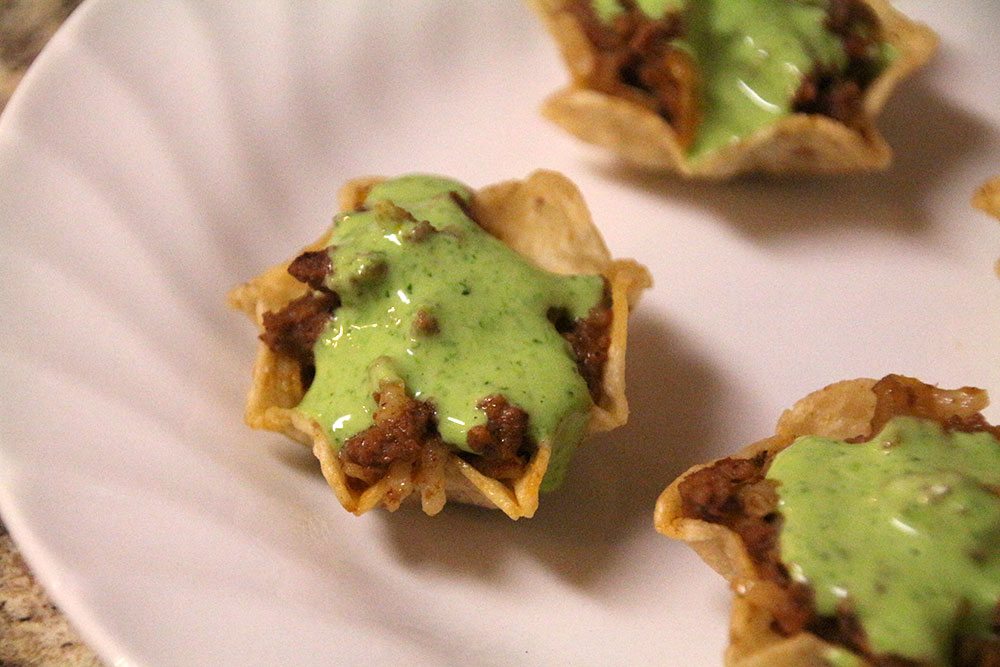 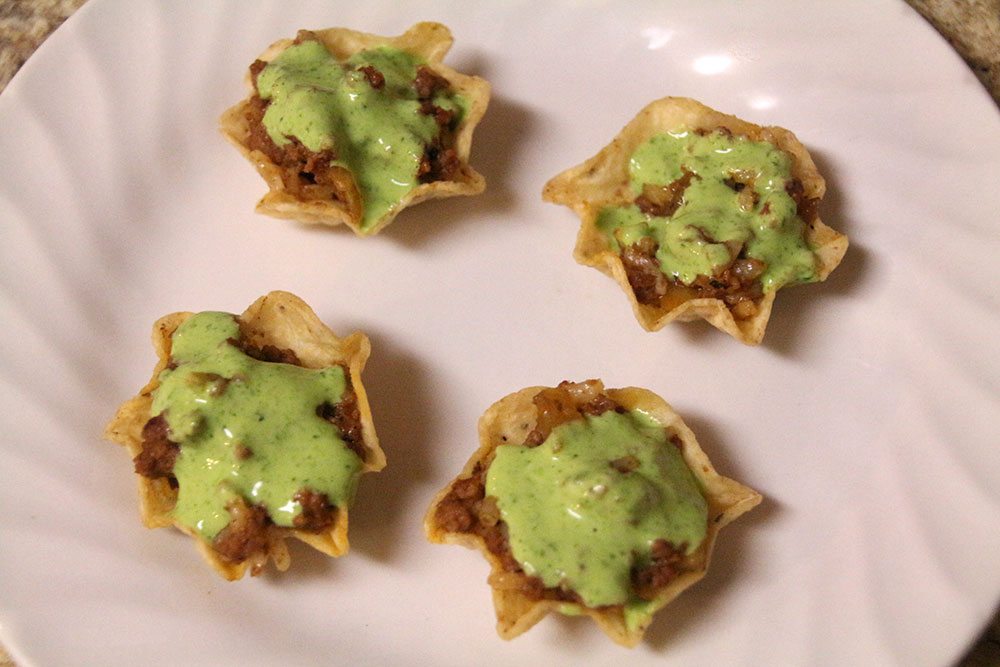 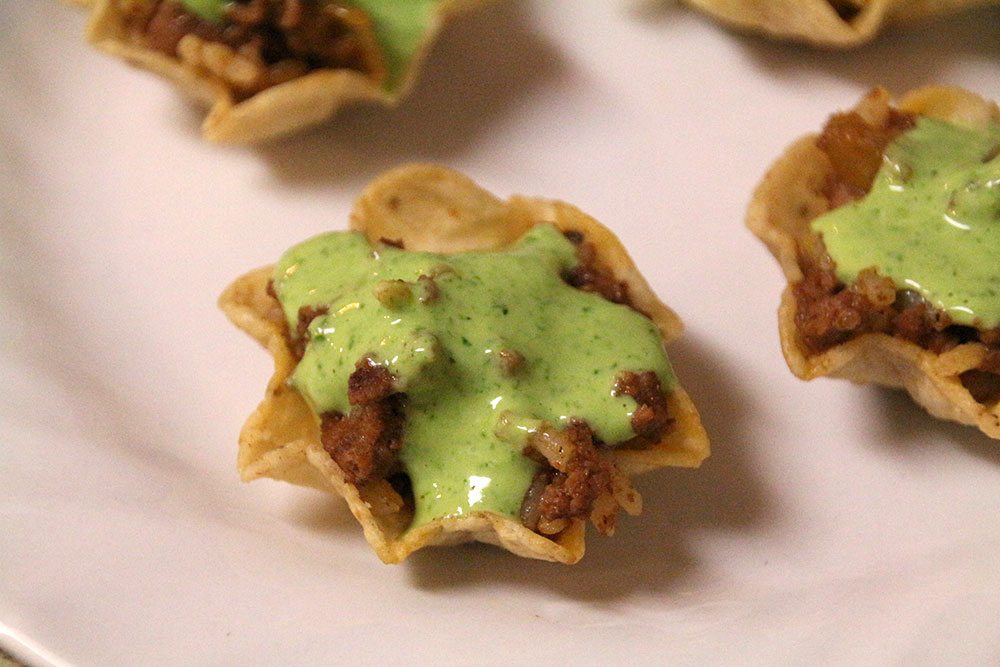 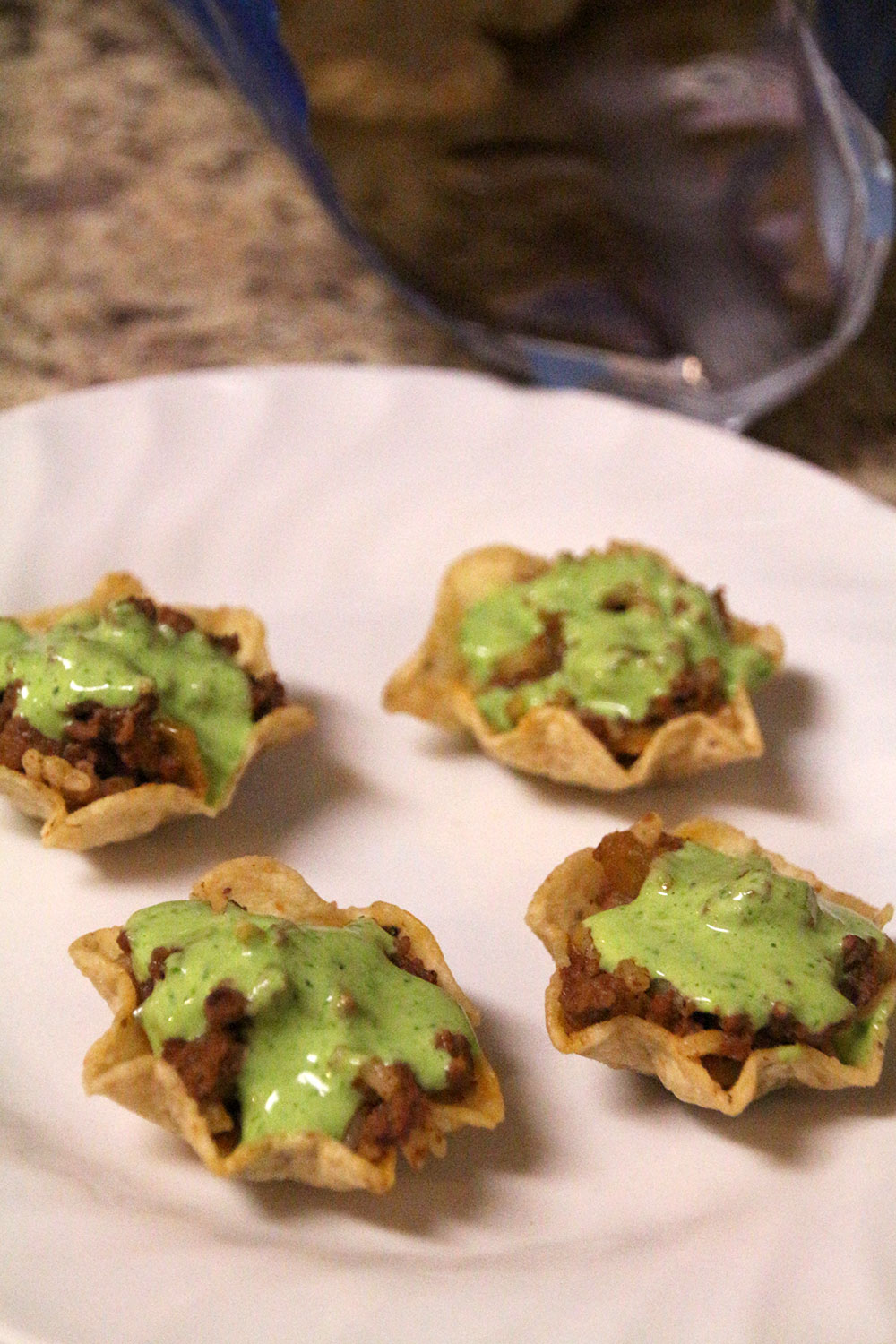 What’s your favorite Super Bowl snack? Are you planning to make anything for the big game?