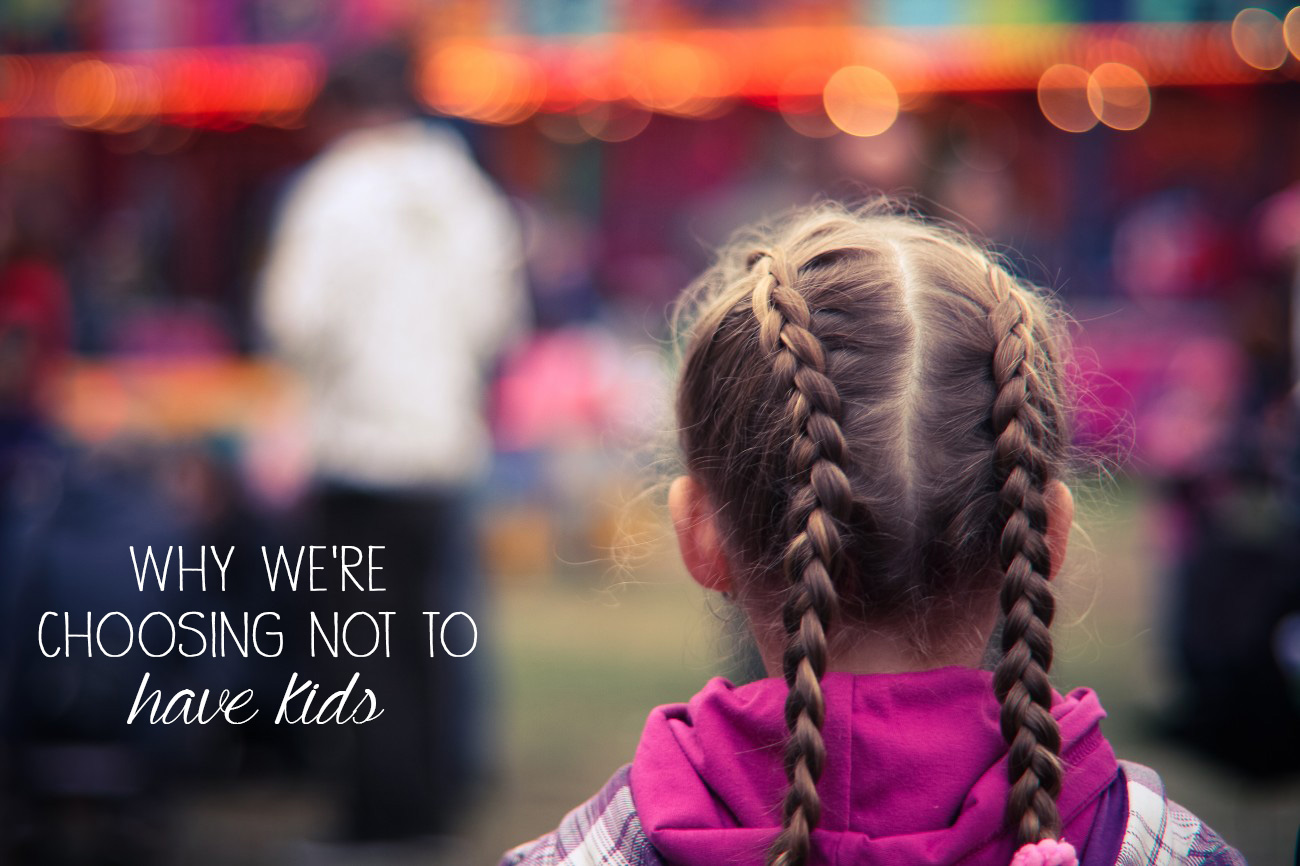 This is one of those posts that I’m a little nervous to write, but I’ve also had it in my drafts for a few months, and I want to put it out there. Also, I think this might be my longest post ever. Be warned. Before getting started though, I want to make a few things clear.

1. I think it’s so great when couples who do want to have kids add children to their family. If that’s what’s best for you, go for it! I don’t look down on people for having kids, just like I wouldn’t want people to look down on me for not having them.

2. I don’t think TJ and I are special in any way for not wanting kids. I know it’s something that a lot of couples choose, and we’re just another one of them. I do want to share the reasons why for people who might be curious, so that’s the purpose of this post.

3. I realize that as we grow and change over the years we may decide to have a kid at some point, and that’s ok. I honestly can’t see it happening, but we reserve the right to change our minds. For now, this is a decision we came to several years ago (separately and then together, once we met), and we’re very happy with it.

4. I’m open to hearing all kinds of thoughts/criticisms/opinions on this subject – that’s part of the reason for writing it! But please, don’t tell me that we’re selfish. That’s what I’ve heard most often, and I stand by the fact that it is much more selfish to have kids just because of a feeling of obligation than it is to choose not to have them. Other than that, please feel free to speak your mind.

Ok, let’s get into this. Admittedly, a good portion of our reasons are superficial, and I’m ok with that. There are also several non-superficial reasons that I feel are real, legitimate concerns. So, I’ve split them into those two groups, and feel free to ridicule me for the superficial ones. I get it!

2. Football
Watching football is one of my favorite things ever (ridiculous as it may sound), and I make a point to watch the entire Steelers game every single week during football season. If I’m being honest, I would hate for the game to be interrupted by a child that needs and deserves my full attention.

3. Money
Kids are expensive, and TJ and I like having freedom with our money. We save the majority of it, but it’s nice to have the flexibility of making an occasional random purchase without putting too much thought into it. With our money going toward a child, our budget would be much more strained, and I fear we’d be constantly stressed about the balance between spending on our kid and spending on ourselves.

4. Sleep
I really value a good night’s sleep. The idea of having to wake up multiple times during the night or staying up with a sick child even when I have work the next day sounds exhausting and miserable. I know how cranky I can get when I’m tired, and the thought of being like that for several years is not something I want to go through.

5. Pregnancy
Pregnancy is something that fascinates me. It’s amazing what a body can do, but it’s also kind of terrifying. There’s no shortage of pregnancy horror stories, and I’m just not sure about signing up for that for 9 months. I know there are some women who love being pregnant, but what if you’re not one of them? How do you deal with it?

We’re halfway though – do you think I’m horrible for my superficial reasons? I hope not! I’m really striving to be totally honest and straightforward, even if that means I’m not exactly painting myself in the best light. That’s what blogging is all about, right?

Legitimate Concerns:
1. My Marriage
I’m terrified that having a kid would negatively affect our marriage. I love that it’s just the two of us (plus 3 cats), and I worry about how adding a third person to the family would affect our dynamic. What if I had a stressful day of motherhood and took it out on TJ? What if I found that motherhood was so time-intensive that I didn’t really have time to focus on my marriage? What if we got so caught up in talking/worrying about our kid that we forgot about taking the time to cultivate our marriage? TJ and I have such a good thing going – we actively work to make sure our marriage is constantly improving and moving forward, plus we genuinely just love spending our time together – it’s scary to think about it changing. I know a lot of couples whose marriages have thrived after having kids, but I also know a lot who’ve had the opposite be true.

3. Resentment
If we ended up having a kid, I’m worried that I’d end up resenting the decision at some point. Would we really be able to travel the world as much as I want to? Would we be able to go to a Steelers game every single year? Would we be able to buy our dream house as quickly as we’d like to? Would our cats lose all of our attention once a baby arrived? If we had a kid, I’d want it to feel like it meant the world to us, not like we had to give up a lot in order to have it. And if we did have to give up a bunch of stuff, I’d hate to feel resentment over it. How could I truly be a good mom if I felt that?

4. Losing Myself
I fear that in having a kid and getting so caught up in being a mom that I’d start to lose myself. Would I still have time to randomly bake homemade bread at 9pm? Would I still have that alone time in my car where I blast music and sing along at the top of my lungs? Would I still feel like me when all of my thoughts are going to my child? It’s scary to think I wouldn’t feel like myself anymore – the silly, pun-making, oh-so-clumsy, sing along with the Sunday Night Football music, get lost in a novel every night – me. Would I lose that me by becoming a mom?

5. Family
TJ and I are both only children. If we had a child, it would have no aunts, uncles, or cousins. If something happened to us, and our parents weren’t around anymore, our kid wouldn’t have any family. That’s sad to think about! And even if nothing happened to us while our kid was young, what about when it’s grown and we pass on? How sad that it wouldn’t have any biological family around. If we did change our mind and have a child, I’m sure we’d have no more than one. Like I said, we’re both only children, and only children make sense to us. So, in theory, our kid would have no siblings, nieces, or nephews either. I’d hate to do that to our kid.

Mostly it comes down to this: if we did have a kid, we’d want to give it the best life possible, and it doesn’t seem likely that we’d be able to do that without giving up most of what we love so much about our lives.

What are your thoughts? Do you want/have kids? Are you unsure about being a parent? I’d love to hear your opinions!